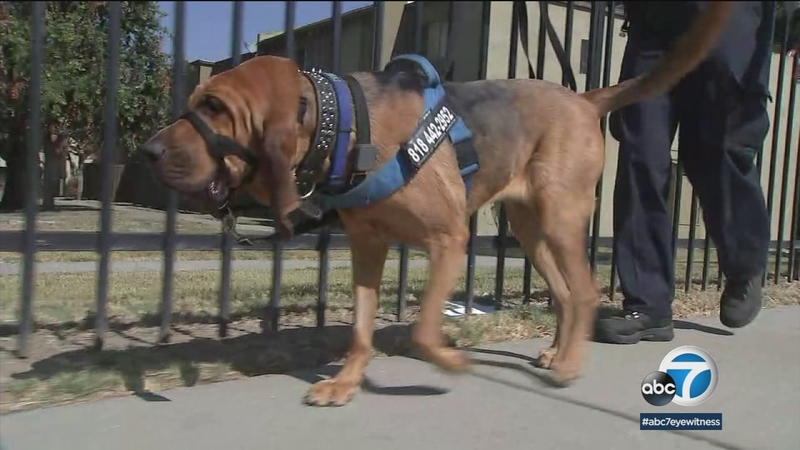 SAN BERNARDINO, Calif. (KABC) -- The handler of a 2-year old bloodhound tries to give her animal the scent of a lost pet by rubbing her nose into one of the missing animal's blankets.

"There you go," shouts Landa Coldiron at her bloodhound, Pepper. "Good checking!"

Pepper then walks away from the San Bernardino home where a chow chow mix disappeared from last week. The dog's name is Nala. Her owner, Evelyn Medrano, is heartbroken.

"We just want to work hard to get her back," Medrano said, fighting back tears. "She's really important to us, to me, and we're doing the best we can."

Pepper led detectives to an apartment complex across the street. But after following the trail around one of the buildings, Pepper abruptly lost the scent.

"(Nala) was most likely picked up by someone," said Berns, who owns Pet Search and Rescue. "That's the safest place for Nala to be is with someone, and since she wasn't wearing ID tags, we're reaching out to the community to ask that they please call us (if they find her)."

Berns said it's an important point to make, especially with the Fourth of July holiday just two days away.

"It might be everybody's favorite picnic day, but it's the dog's least favorite day because they get scared of the fireworks," Berns said. "They run like crazy, because they don't know if (they're) being attacked, or someone's shooting a gun at them. They don't know what's happening, so they just run."

The pet detectives canvassed the area for a few hours, even going door-to-door at the apartment complex. Berns said hiring a pet detective doubles a pet owner's chances of finding their pet, or at least getting closure.

"I've been searching for lost pets for 13 years now," said Berns, who said she started her business in San Diego when her own pet went missing. "There really wasn't much help out there, and that's why I started doing this."

As for Medrano, she maintained hope that Nala would be found. She said they developed possible leads when two neighbors told detectives they think they've spotted Nala around the apartment complex at nighttime.