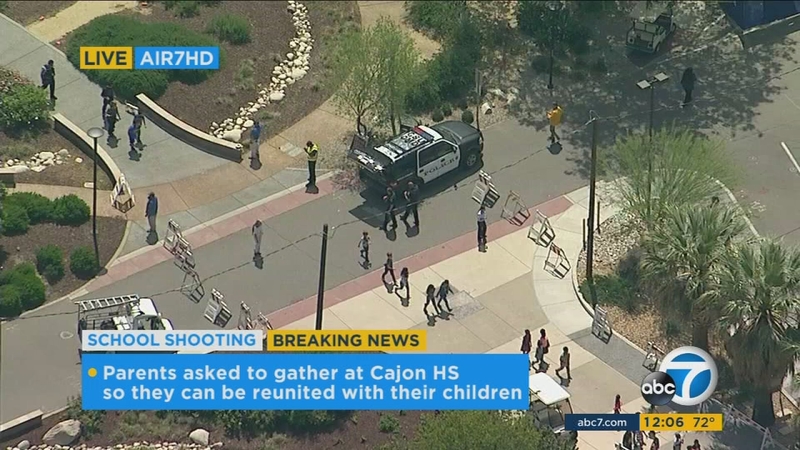 San Bernardino principal speaks out after murder-suicide on campus

The audio recordings were released on Friday by the San Bernardino Police Department.

In the first recording, a female voice can be heard on the call, telling the dispatcher there is an active shooter at North Park Elementary.

"One of our teachers was shot," she says.

The dispatcher urges the caller to stay on the phone while she transfers her to school police.

"One of our teachers got shot in the classroom," she says again, describing the shooter as "Mrs. Smith's husband."

She said the man was wearing a beige blazer, and said the victim was in her classroom, B-1.

In the second recording, dispatch can be heard telling units the suspect is possibly the husband of a school employee, and that the victim may be in classroom B-1.

On Monday, a special education teacher, Karen Smith, and one of her students, 8-year-old Jonathan Martinez, were fatally shot by Smith's estranged husband, Cedric Anderson, who then turned the gun on himself. Another boy, 9-year-old Nolan Brandy, was critically injured but later upgraded to good condition. He was released from the hospital Friday afternoon.

Anderson fired off 10 shots from a .357 Magnum. Just a month after they got married, Anderson and Smith had marriage problems. In the week before Monday's shooting, Smith told family members that Anderson had tried to get her to return home and threatened her, but she didn't take him seriously.

School officials said they didn't know this when he arrived at the school and was allowed to see his wife.

North Park Elementary School principal Yadira Downing spoke exclusively to Eyewitness News about the deadly incident as she prepared to welcome the children and staff back to school on Monday.

"They said this is their school and they do not want what happened to disrupt their life and to intimidate them to come into work...they wanted to be here for their kids," Downing said about school staff.

A vigil was set to be held at 6 p.m. for Smith, the beloved teacher killed in the shooting, Friday night at Grace Chapel in San Bernardino.