San Bernardino attack recalled by reporters who were there that day 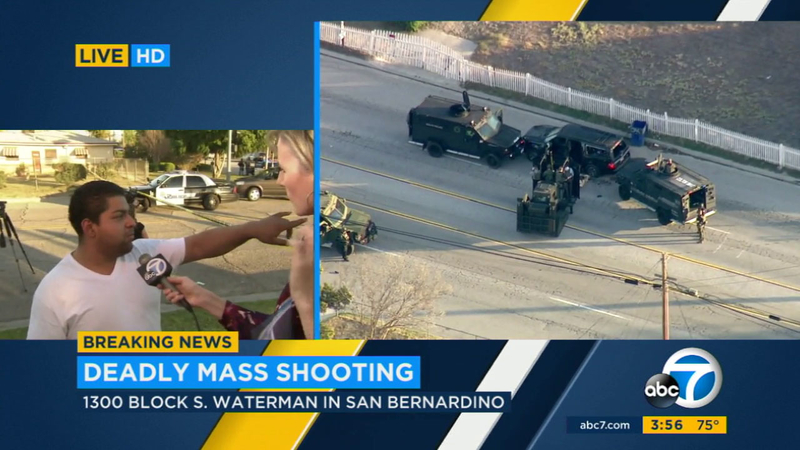 San Bernardino attack recalled by reporters who were there that day

LOS ANGELES (KABC) -- One year ago, the San Bernardino terrorist attack gripped the nation - but traumatized a community.

Eyewitness News anchor David Ono sat down with his ABC7 teammates to recall one of the most terrifying stories they've ever covered.

On Dec. 2, 2015, Syed Farook and his wife Tashfeen Malik carried out a mass shooting at the Inland Regional Center in San Bernardino, killing 14 people and injuring 22. At the time, it was the country's worst terrorist attack since Sept. 11, 2001.

The attack began at 10:58 a.m. Soon after, reporters began getting tips about a mass shooting in San Bernardino and they rushed out to find what was still a very active and chaotic scene.

"There were just people running everywhere," recalled reporter Leanne Suter. "Running from the gunfire, running through the neighborhood trying to get away from what was going on."

This extended video takes an in-depth look at the San Bernardino terrorist attack of Dec. 2, 2015.

They interviewed frantic witnesses and people who still had loved ones inside the complex, hiding and fearing for their lives.

One distraught man read text messages from someone who was still inside the IRC.

"Shooting at my work. People shot. In the office, waiting for cops," the man read, his voice breaking. "Pray for us. I am locked in an office."

After the attack, Farook and Malik fled the scene in a rented SUV and for about four hours were on the loose somewhere in the area.

"You got that real feeling that these guys ... were gone and they could come back to the scene," said reporter Rob McMillan.

"So there was not only that sense of how horrible this is - there were countless people who perhaps lost their lives - but the fact that the shooters got away and they could return to the scene. There was a lot of fear about that."

Investigators were able to track down the shooters about four hours later at their Redlands home. Farook and Malik led police on a short chase that ended less than two miles from the IRC site, where they were killed in a shootout with officers.

At the time, little was known about the attackers or their motives.

AIR7 HD reporter J.T. Alpaugh remembers wondering why the attackers returned to a location so close to the site of the original shooting.

"Why would they even want to come back here? The only reason I came up with was to do more damage," he said.

"So those officers, those first responders, San Bernardino Police Department, San Bernardino County sheriffs, and all the agencies around there - absolute heroes. It's untold how many lives they probably have saved."

Many of those who survived the IRC attack continue today to suffer from PTSD.