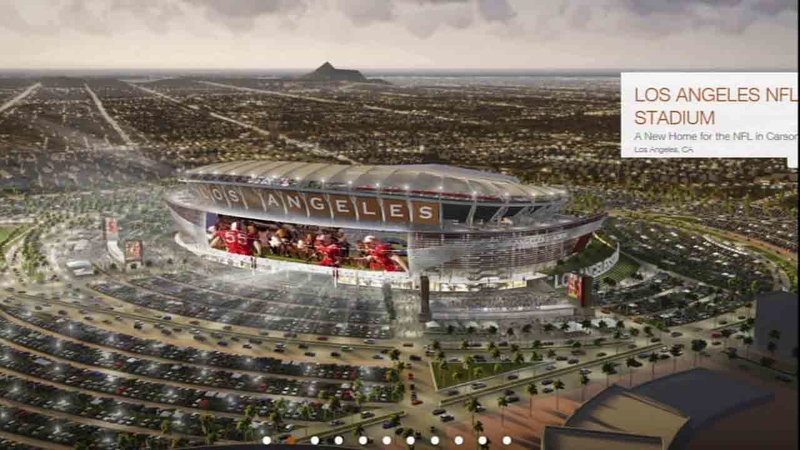 CARSON, Calif. -- Organizers behind a proposed stadium near Los Angeles that could become home for the NFL's San Diego Chargers and Oakland Raiders announced Saturday they reached an important, early benchmark on the path to construction.

A coalition of supporters, including labor unions, has collected over 14,000 petition signatures in the city of Carson, nearly twice the number needed to place the stadium plan before local voters.

"We have all been extremely encouraged by the sky-high level of support we have found for the stadium project," Chargers attorney Mark Fabiani said in a statement.

The Raiders and Chargers are planning a shared stadium in Carson, south of Los Angeles, if both teams fail to get new stadiums in their current hometowns.

It's one of two prominent stadium proposals that have emerged in the Los Angeles area this year: St. Louis Rams owner Stan Kroenke is part of a development group planning to build an 80,000-seat stadium in Inglewood, roughly 10 miles from downtown Los Angeles.

The Carson signatures must be verified by election officials to qualify the plan for the ballot, a process that is expected to begin next week. However, the election could be bypassed if the project is approved by Carson's City Council.

The dueling stadium plans have raised the hopes of fans that Los Angeles could end its two-decade stretch without an NFL team. The projects are among a string of stadium proposals in the Los Angeles area that have emerged since the Rams and Raiders left Southern California after the 1994 season.

Earlier this month, the Anschutz Entertainment Group announced it was spiking plans for so-called Farmers Field in downtown Los Angeles, after five years and $50 million in planning expenses. The stadium proposal once had been viewed as a leading suitor to attract an NFL team, but AEG failed to secure a team to play there and faced a government deadline next month to cut a deal. On Thursday, Los Angeles Mayor Eric Garcetti suggested that the downtown plan could be revived, and its apparent demise was "over-reported."

The Kroenke plan envisions a stadium rising on the site of a former horse track, as part of a sprawling development of homes, parks and office space. The Carson stadium would be built on a former landfill.

League spokesman Brian McCarthy has said the NFL wants franchises that are "'strong and successful in their existing markets."

Under current rules, the next opportunity for a team to file to relocate would be in January 2016. Any decision to move would have to clear a tangle of league hurdles, including winning the support of at least 24 of the 32 teams.