The police officer grabbed a 100-foot leash he uses for his service dog and rappelled down to the water.
City News Service 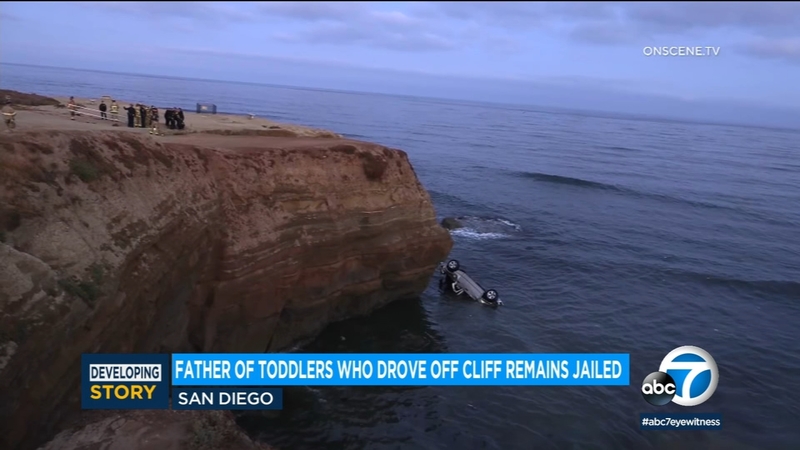 POINT LOMA, Calif. (CNS) -- A San Diego man remained jailed Wednesday after his twin 2-year-old girls were rescued from the ocean near Point Loma after the father allegedly drove the three of them off a sea bluff on purpose.

About 4:30 a.m. Saturday, the toddlers' mother made a 911 call to report that her husband, Robert Brians, 47, had taken their children without permission and had contacted her with numerous calls and texts ... clearly stating she may not see (them) again,'' according to the statement on GoFundMe page created Sunday on behalf of the girls.

After authorities tracked the apparently suicidal man's pickup to the Sunset Cliffs area via cellphone signals, an officer located it on Hill Street, near Cornish Drive, according to San Diego police.

As the officer approached, the truck sped off and plunged over a 30-foot-high rocky sea bluff.

Prosecutors are seeking a trial for a 19-year-old man accused of opening fire on a San Diego-area synagogue back in April, leaving one woman dead and three others injured, including a rabbi and an 8-year-old girl.

Reaching the scene of the crash and seeing Brians' pickup upside-down in the water, Wiese grabbed a 100-foot leash he uses for his service dog, wrapped it around his chest, gave the other end to fellow officers and rappelled down the precipice, police said.

Wiese then swam out to the foundering truck and rescued the children and Brians. Medics took all three to hospitals for treatment of injuries that were not considered life-threatening.

Brians was booked into county jail later that day on suspicion of two counts each of attempted murder, kidnapping and child cruelty.

The girls are hospitalized with stable vital signs, according to Colin Moore, a friend of the twins' mother who created the GoFundMe.com page.

Donations totaled $12,670 as of Wednesday afternoon. There were 294 donors.

Wiese, who has been hailed as a hero over the last several days for his quick actions in the case, similarly sprang into action in the minutes that followed the deadly synagogue shooting in Poway 14 months ago, according to police.