San Diego police say the suspect was able to slip out of handcuffs and fire an officer's gun while inside a patrol vehicle.
KABC 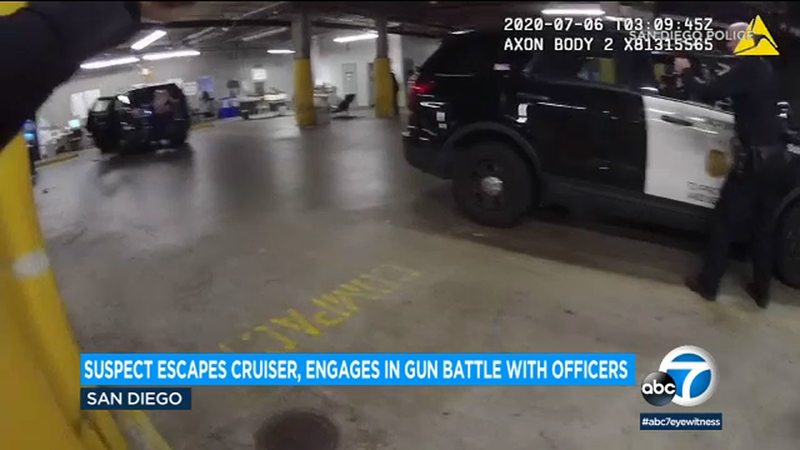 SAN DIEGO (KABC) -- Video captures a dramatic officer-involved shooting in San Diego that occurred after a suspect allegedly slipped out of handcuffs, grabbed an officer's handgun and fired out the back of a patrol vehicle.

San Diego police say the suspect was able to "slip one hand free from his handcuffs," break through a plexiglass barrier and get a gun that was inside an officer's backpack during the time he was waiting to be processed for his arrest at police headquarters.

Surveillance video from the station's sally port shows officers pulling their weapon when they noticed the suspect had a gun inside the vehicle.

Police repeatedly ask the man to show his hands while inside the vehicle, bodycam video shows. When officers back up, video appears to capture a bullet shoot through the rear of the car. Officers then fire back.

Police say the man tried to opened the rear door, and emerged with the handgun tucked into his waistband. They added he ignored commands to surrender.

When the suspect tried to open the driver door, officers shoot multiple times before a K-9 leaps onto him.

Officers provided first aid when the suspect went down. He was taken to a hospital to be treated with non-life threatening injuries.

The incident occurred Sunday and initially started when a hotel in the downtown area reported the 25-year-old man for causing a disturbance. He had allegedly threatened to stab hotel staff and was pepper sprayed and held down by security.

He was taken into custody without incident and police planned to evaluate him for being under the influence. Police say they found methamphetamine and five credit cards that didn't belong to him.