KABC
SAN DIEGO (KABC) -- A tense standoff outside a San Diego hospital following a chase of an armed bank robbery suspect from Riverside came to an end Thursday morning after authorities confirmed the suspect shot himself.

The incident began Wednesday night when the suspect allegedly robbed a bank at gunpoint just before 6 p.m. in the 19300 block of Van Buren Boulevard and fled the scene, police said.

A suspect accused of robbing a bank in Riverside led authorities on a chase to San Diego and is in a standoff with deputies in front of a children's hospital Wednesday night.

The San Diego County Sheriff's Department took over the pursuit from Riverside authorities when the chase entered San Diego County. The suspect stopped in front of Rady Children's Hospital, and a standoff ensued.

Officers and K-9s surrounded the suspect's vehicle, a black SUV. The SUV was parked outside the hospital overnight, as police told people inside to shelter in place.

The suspect was identified by the San Diego County Medical examiner as 53-year-old Rolando Fremista.

The FBI said it believes Fremista was a possible suspect in four robberies over the past 10 months in Riverside, San Bernardino and San Luis Obispo counties, dating back to April 2019.

Fremista, who the FBI believes to be known to them as the "masked man bandit," was arrested in Los Angeles in 2000 for a bank robbery, the agency said.
Report a correction or typo
Related topics:
riversidesan diegoriverside countysan diego countypolice chasebankcar chasehospitalbank robberystandoff
Copyright © 2020 KABC-TV. All Rights Reserved.
RELATED 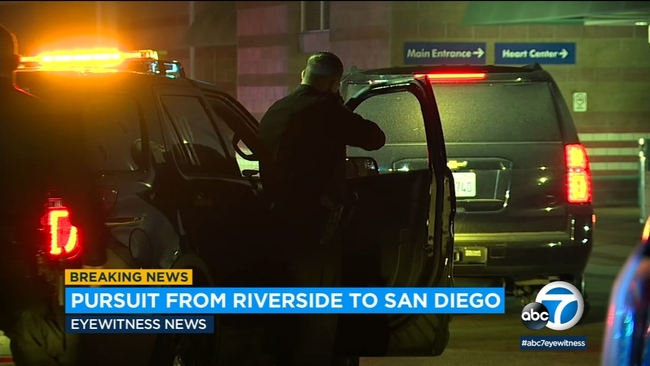