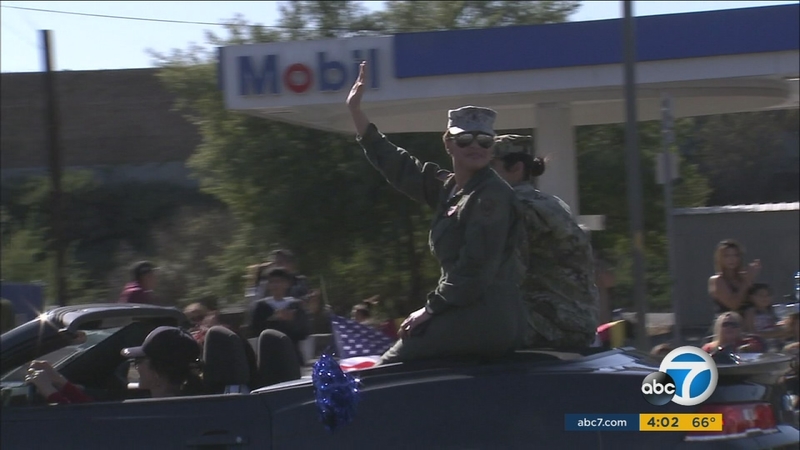 PACOIMA, LOS ANGELES (KABC) -- Hundreds of people paid tribute to those who have served at the 12th annual San Fernando Valley Veterans Day Parade on Wednesday.

Holding American flags, spectators lined the streets near Laurel Canyon and San Fernando Mission boulevards in Mission Hills and cheered both the parade participants and the veterans in the crowd. The parade included over 100 veterans groups and marching bands.

One of the honorary grand marshals for the San Fernando Valley Veterans Day Parade is a woman ABC7 introduced Monday.

The San Fernando Valley native said the holiday is a proud day for her and her family.

"I'm honored to be here," she said. "This is the first year home and it's great exposure and that the kids are seeing us in uniform...very proud to be here."

Veterans from World War II to the recent wars in Afghanistan and Iraq were thanked.

"In my family, my dad served, I served, his father served," said Larry Reyes, a U.S. Navy vet. "I have a long history... to just be a part of something like this is really important."

A carnival was held at Ritchie Valens Recreation Center in Pacoima following the parade.

After being thanked numerous times for his service, he hopes more people will take action.

"By doing things for the veterans, especially those who came back maimed, no leg, no arm," he said. "Because, I'm glad nothing directly happened to me. I got real close a couple of times but i was glad i came out in one piece."