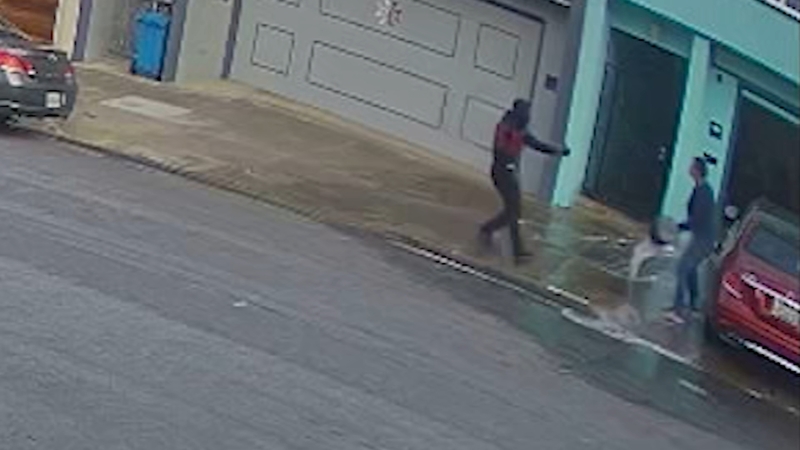 SAN FRANCISCO -- A San Francisco man says he was held up at gunpoint while washing his car and then robbed and held captive in a bathroom with his family.

Now, he is doing more than just sharing his story. He and his family decided to take a proactive approach to safety for their entire neighborhood.

It was a typical Friday evening for the man in his 40s as he was washing his car at his home near McLaren Park. He requested his name not be used.

Surveillance video from across the street shows a vehicle circling the block at least four times before the incident happened. A weapon can be seen in the suspect's hand as he approaches the victim, who drops his bucket and is forced inside the garage.

"They took me up to my house where my family was, put us all into the bathroom," says the man behind sunglasses and face mask.

As two suspects made their demands, "they said where's the money, where's the money?" and stole jewelry valued at thousands of dollars. The man's wife and two daughters endured what they thought would surely be a grim ending.

"I was thinking either someone is going to get shot or someone's going to call the police, like our neighbors, and it's going to be a hostage situation," the couple's 11-year-old daughter said.

The man pulled off his glasses to show off the deep bruising around his eye and explained, "They just pushed my face into the wall to make me realize this is a real situation."

The rest of the family was physically unharmed.

Disturbing video shows the moment a woman was attacked and carjacked in the Bay Street mall parking garage in Emeryville.

Even so, the husband and father is fully aware the emotional toll is much greater, breaking down momentarily in tears.

This story does not stop here.

The father and 11-year-old daughter went out the very next day and met with every single neighbor and left letters describing what happened to them.

"Seeing a neighbor and child tell them what happened... there's more heart. They take it to heart right away," says the man, who believes a police officer heeding the same warning could be seen as intimidating to neighbors.

The family believes giving up their possessions right away kept them alive, and for that they are grateful.

"If they want your possessions, let them have the possessions, just don't let them hurt you or your family or anything that's not replaceable," says the daughter.

The man is speaking out to show how some neighborly love, like sharing a warning or surveillance video, can make a difference.

"I love the city, and the city is changing. Be careful. Be vigilant. If you have to wash your cars, please do it with a neighbor."

San Francisco police continues to search for the suspects.