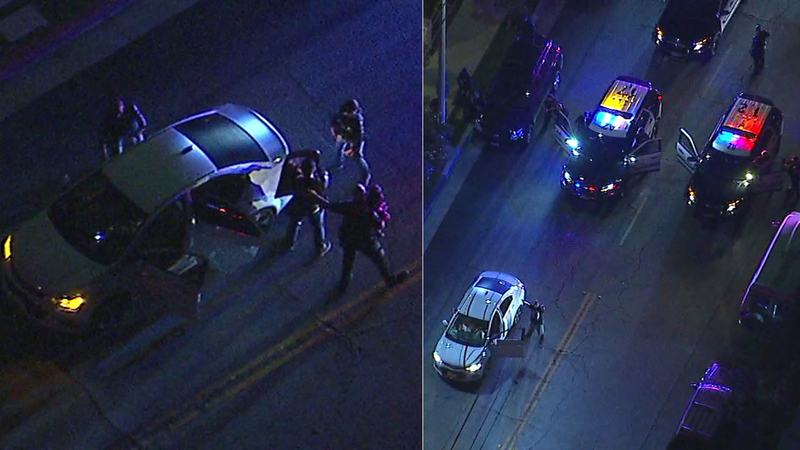 AZUSA, Calif. (KABC) -- A man and woman carrying two toddlers in the backseat of a vehicle led authorities on a chase through the San Gabriel Valley.

The chase started around 10:30 p.m. in Azusa. It was unclear how the chase started, but the suspect quickly went southbound on the 605 Freeway, hitting speeds as high as 100 mph.

At one point, the suspect traveled at high speeds on streets in South El Monte, but then got onto the northbound side of the 605 Freeway. Authorities believed the suspect was armed and dangerous.

The white Chevy Cobalt with no plates eventually transitioned onto the eastbound 210 Freeway through Irwindale. The driver then exited the freeway and slowed to about 40 mph.

Azusa police removed two toddlers from the back of a police vehicle after a man and woman led authorities on a chase through the San Gabriel Valley.

The driver blew through traffic stops, swerved around traffic and then eventually headed into a residential neighborhood.

As he was in the 900 block of North Alameda Avenue, the vehicle came to a halt and the driver stuck his hands out the window to comply with authorities.

The suspect exited the vehicle, backed up toward police and was taken into custody.

Within a few minutes, the woman who was a passenger in the vehicle then crawled over to the driver's side, at one point causing the car to lurch forward. She stepped out of the vehicle barefoot and then walked toward police and was taken into custody.

As authorities searched the vehicle, they found two small children in the backseat and took them out safely.