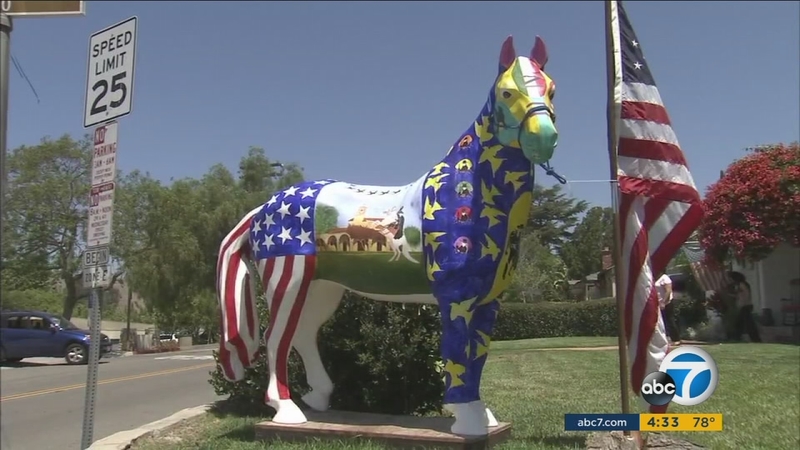 Deputies said the vandals dragged one of the sculptures about a block down the street, leaving a very deep crack in the artwork.

"It hurts because what it means to the artist. These paintings for us are our babies," artist Art Guevara, an Orange County artist known for his paintings, murals and sculptures, said.

Guevara set up the display eight months ago on the front lawn of a private home. There were no issues until July 4.

"We believe this happened between 1 in the morning and 7:30 in the morning July 4th," said Lt. Mark Stichter with the Orange County Sheriff's Department.

Out of the three sculptures, the two that suffered damage were patriotic themed. One horse had an American flag painted on it, while the other represented the story of Native Americans.

"It's never happened before, so I can't really say why it happened, but it bothers me it was on the Fourth of July," Guevara said.

The sculptures were meant to be auctioned off to raise money for non-profits, according to Guevara.

He said it will take him least 30 hours to repair and repaint both sculptures, with an estimated cost of $3,000.

Dana Yarger, a Dana Point resident and creator of the Wild Horses - San Juan Capistrano Public Art Project, invited Guevara and other artists to lend their art to educate and inspire the public.

In all, there were nine horse statues throughout San Juan Capistrano, all to bring attention to saving wild Mustangs and the history of the horse, especially its history within the city.

So far, authorities said they had no suspects in the case, but hoped someone would come forward with information.