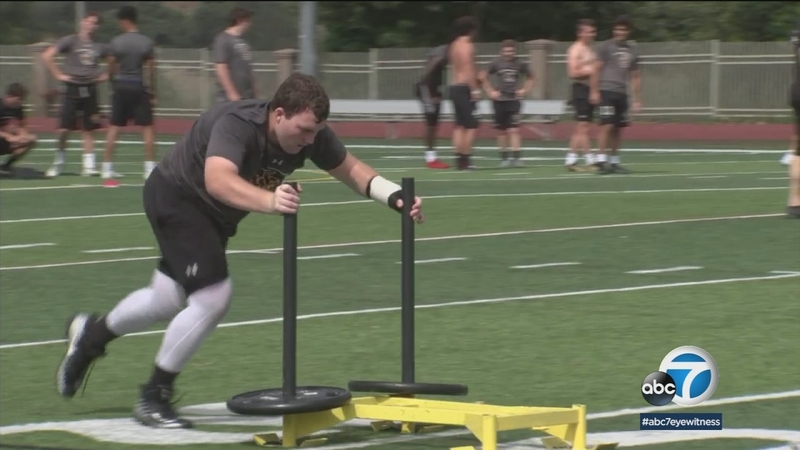 SAN JUAN CAPISTRANO, Calif. (KABC) -- At the start of football practice at JSerra Catholic High School in San Juan Capistrano, Zach Round surprised everyone around him as he sprinted down the field.

"To see him now, you wouldn't even imagine what he's gone through," his mother Lynette Round said.

This time last year, the 18-year-old was learning how to walk. On Jan. 16, 2017, Zach was out for a normal mountain bike ride when he tried to jump a road and missed.

The crash was captured on his GoPro camera. He was airlifted to the hospital, where a routine CAT scan to check for internal injuries revealed a golf ball sized brain tumor.

"My initial reaction was, 'Am I going to die?" Zach said. "My second thought was, 'Will I still be normal?'"

Zach had 13 surgeries. His recovery was an uphill challenge, battling bacterial meningitis, kidney stones and other infections. He had to re-learn basic things, such as tying his shoes and taking his first steps.

"I tried every day," Zach said. "I went from a wheelchair, then my physical therapist had me using a walker."

His mother said her son has worked hard.

He still suffers from double vision and continues to try to get his limbs to move like they used to. Zach does several hours of physical therapy each week. He hopes to one day regain full coordination on his right side.

Zach is entering his senior year at JSerra High, although he had to catch up on missed classes. His dream is to play college football, which he said motivates him to push hard on the field.

"There's still a lot of recovery to go on, but if he's progressing like he is and continues to do that I still think he has a chance," said Pat Harlow, JSerra's football head coach.

Zach's also playing rugby again, and he's back on his mountain bike. He hopes to ride in Whistler, British Columbia, in a year.

He also has a message to others facing their own struggles.