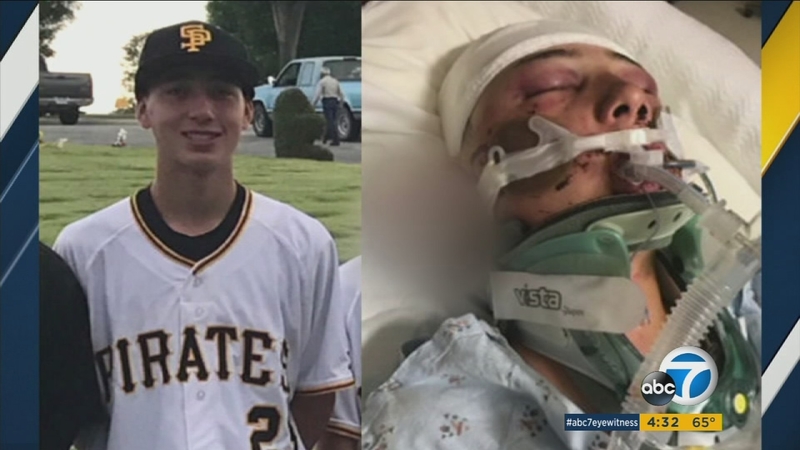 LOS ANGELES (KABC) -- San Pedro High School's baseball teams are practicing as usual on Monday, but under a cloud of sadness.

Their JV teammate, 15-year-old Evan Jimenez, is fighting for his life in a hospital bed after suffering a brutal beating at the hands of potential gang members.

"It's pretty heartbreaking because he's not there with us," Jimenez's friend Cotie Edwards said.

Edwards said the team was exhorted by their coach to stay strong and keep their heads up during their teammate's tragic absence.

Sheriff's detectives say the 15 year old was walking home with a girl Thursday night approaching an alley near 2nd and Bandini streets when they came across two men.

"They jumped off the wall and approached him asked him where he was from," said Jimenez's aunt, Debra Alvarado.

When Jimenez replied he wasn't with a gang, authorities say the suspects grabbed a bottle of hard liquor and hit him with it, but they didn't stop there.

"This is about as close as you can get to a homicide without it being one," said Sgt. Ricky Osburn, a detective on the case.

Jimenez's mother and aunt said while the girl ran for help, friends rushed Jimenez to a hospital.

Now, Jimenez's mother is facing her worst fear. "This is just a nightmare," she said. "He's just a kid."

"He doesn't deserve it," Jimenez's friend Alexis Mitchell said. "People who did it deserve to be punished for what they did."

At school, students are wearing Jimenez's jersey number 23 on their faces and hands in his honor as sheriff's detectives, working alongside the Los Angeles Police Department, run down a number of leads.

Investigators said they do know that the suspects are gang members.