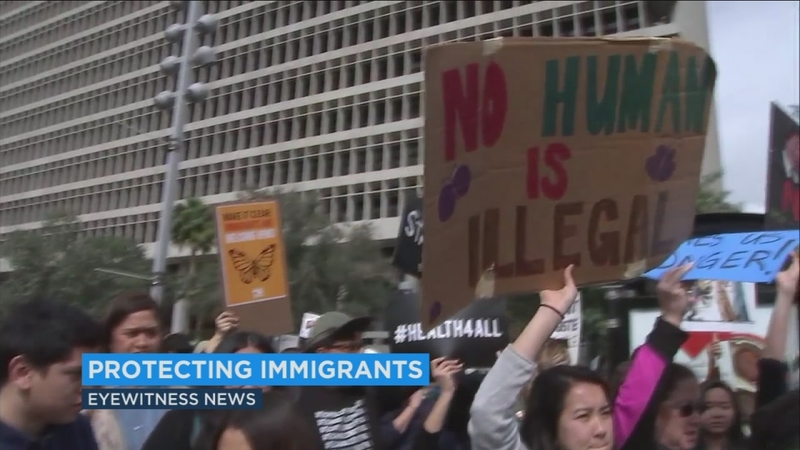 Starting Jan. 1, 2018, the bill bars police from asking people about their immigration status or participating in federal immigration enforcement in most cases.

California is home to an estimated 2.3 million undocumented immigrants.

Opponents of SB 54 had argued that the legislation was an invitation to the world to enter and reside illegally in California.
California's Democratic Senate leader Kevin de Leon introduced the bill in response to widespread fear in immigrant communities following the election of President Donald Trump, who railed against immigrants in his campaign and promised to sharply ramp up deportation.

California Democrats approved a "sanctuary state" bill Saturday that would limit how local and state police can interact with federal immigration agents.

California's influential sheriff's association opposed the measure, warning it would make it harder for them to protect the public.

Under the bill, police, sheriff's officials and jail officers will be barred from transferring immigrants to federal authorities if their rap sheet includes only minor offenses.

The bill "will put a large kink in Trump's perverse and inhumane deportation machine," de Leon said at a press conference in L.A. celebrating the signing.

SB54 originally would have severely restricted the authority of police officers to cooperate with federal immigration authorities. At Brown's insistence, it was scaled back to allow cooperation in jails.

Brown and de Leon have said the bill does not give safe harbor to immigrants, particularly after the concessions Brown demanded.

Local activists say they want something beyond symbolic, beyond just a resolution. They want an ordinance that officially declares Los Angeles a "sanctuary city."

While activists say the so-called "sanctuary state" bill signed by brown is a good start, Indivisible Highland Park, a group that was born following Trump's election, says they want something beyond just a symbolic resolution.

Dozens of community members gathered at a town hall meeting in the Westlake District Thursday night to push for ordinance that would officially turn Los Angeles into a "sanctuary city."

"Los Angeles is the nation's immigrant city. The largest immigrant city in this country, and we don't have a sanctuary policy when Santa Ana already does," said Tessie Borden with Indivisible Highland Park.

"We want Los Angeles to be a city of sanctuary and we want that to be very meaningful," Cedillo said.

Another big talking point at the meeting was Thursday's deadline for DACA renewals.

"The date that was picked, today, to stop all future DACA extensions is so arbitrary, unfair and it's unworkable. Why, 50,000 more youth 3who have DACA now missing the deadline, what happens to them?" said Maria Elena Durazo, national vice presidident of the organization, Unite Here.

Cedillo says he will push to keep them in the U.S. even though their futures are uncertain.

"We've invested in them. They've succeeded at the highest levels at our best universities and colleges, and we want to keep that investment here in California, here in Los Angeles," Cedillo said.