A fast-moving brush fire burning in the hillsides of Santa Clarita and prompting hundreds of evacuations has charred 20,000 acres and is only 20 percent contained.

Containment was listed at only 20 percent by late Saturday evening.

Officials said at least 1,500 homes were threatened by the flames. At least one home had burned, as well as several structures on a movie ranch.

Officials also found a man's body in a car near one of the neighborhoods where the home had burned, but his cause of death had not been determined.

Additional structures were also destroyed by the flames, but fire officials had not gotten close enough to determine if they were homes or commercial buildings.

If the winds change directions, officials say thousands of homes in the San Fernando Valley could be threatened.

U.S. Forest Service spokesman Nathan Judy said some homeowners are trying to stay at their houses and fight the flames alongside firefighters in evacuation areas. In those cases, law enforcement is being called in to enforce the evacuations.

The blaze broke out Friday afternoon, starting at a small acreage before exploding to more than 3,000 acres by Friday evening. It quickly grew to 20,000 acres by Saturday evening.

"We were experiencing 50- to 100-foot flame links running across these ridges and down these slopes and doing the kind of things we normally expect to see at 2 p.m.," Los Angeles County Fire Department Battalion Chief Dennis Cross said. "It's been a really tough fire and a really tough fire season so far."

Crews are also concerned about the high temperatures and low humidity that could continue to fuel the fire.

--All residents in Placerita Canyon from the Nature Center to Sand Canyon.

The Wildlife Waystation was evacuated Saturday and requested help from nearby residents to assist in moving as many of the wild animals as possible. The station said about 400 exotic animals, including tigers, chimps and bears, had to be moved out to safety. By Saturday afternoon, the animal sanctuary received enough help from volunteers.

One lane of the 14 Freeway remained closed as crews worked to suppress flames that were near the road, according to the Angeles National Forest Service.

Massive plumes of smoke billowed from the hillsides and could be seen throughout the Los Angeles region, from Orange County out to parts of the Inland Empire. The skies in many areas, especially the San Fernando Valley, were blanketed with thick, dark mounds of smoke and ash.

The South Coast Air Quality Management District issued a smoke advisory for parts of the San Fernando, San Gabriel and Santa Clarita valleys as well as central Los Angeles. Making air quality worse Saturday night was a separate fire that broke out a commercial building in downtown Los Angeles that also sent thick plumes of smoke into the sky. 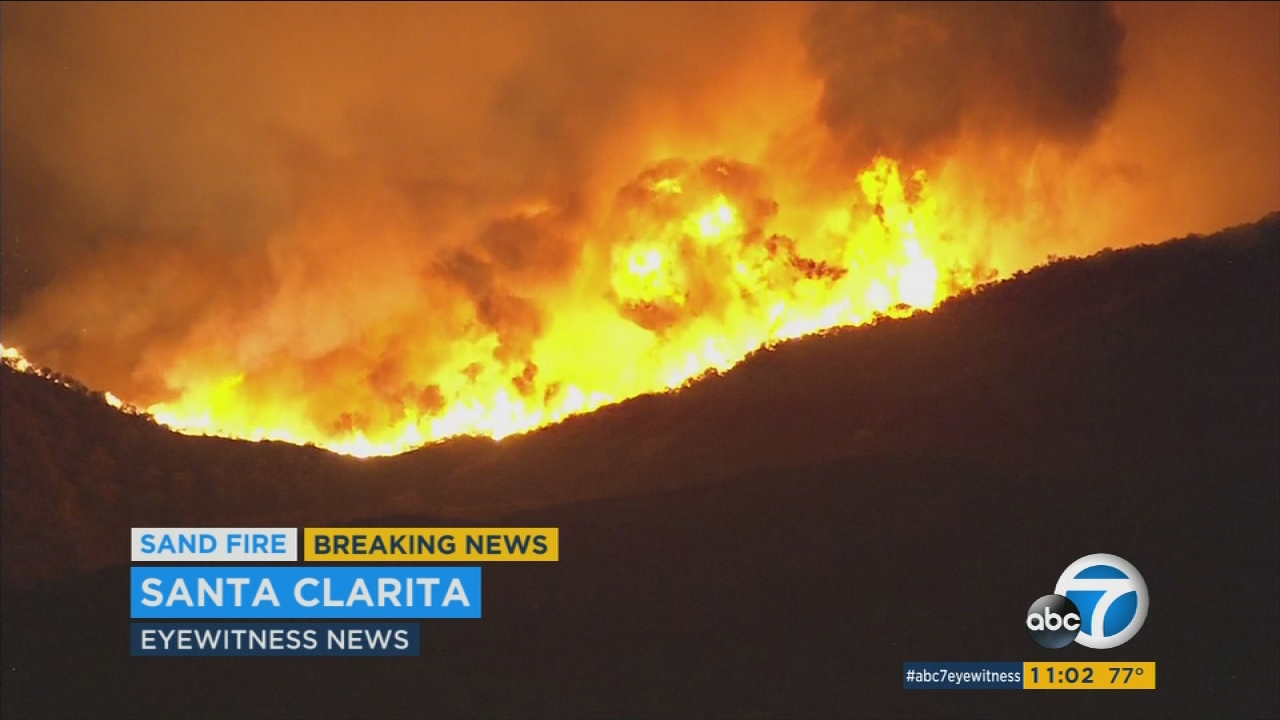