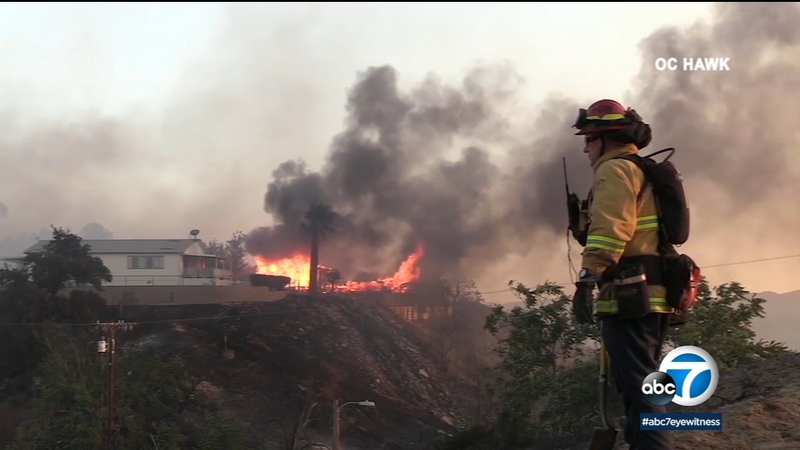 CALIMESA, Calif. (KABC) -- A second body was found over the weekend at a mobile park home in Calimesa after a 1,000-acre brush fire ripped through the community, destroying dozens of structures and sending residents fleeing.

The Riverside County Sheriff's Department said the body, which has yet to be identified, was found while authorities were searching a burnt mobile home. Additional information was not released.

The circumstances surrounding the first fatality and those who are unaccounted for were not immediately clear. However, the sheriff's department identified the first victim as 89-year-old Lois Arvikson of Calimesa.

The blaze - dubbed the Sandalwood Fire - burned over 1,000 acres and was 77% contained by Sunday morning, Cal Fire officials said. It began Thursday when a trash truck dumped burning garbage in the area, resulting in the loss of 76 structures, mainly homes at a hilltop mobile home park, fire officials confirmed. An additional 16 structures were damaged, nine moderately and five minimally.

The flames from the burning pile of trash quickly spread and ignited nearby vegetation in flames, according to Cal Fire Riverside Capt. Fernando Herrera.

Investigators are still working to determine if any criminal charges will be filed in connection with the fire.

Evacuation orders remained in place for the Villa Calimesa Mobile Home Park as of Saturday evening.

A Calimesa man says he lost his home in the Sandalwood Fire on the eve of his birthday.

City and county officials declared a local emergency, and mandatory evacuation orders were issued for south of Seventh Street and east of County Line Road. Authorities warned that some road closures in the area could remain in effect through the end of the day.

A shelter for residents is open at Mesa Grande Academy at 975 Fremont St. An animal evacuation center was also set up for families with large and small animals. Animals may be taken to the San Jacinto Valley Animal Campus, located at 581 S. Grand Ave.

Students were evacuated Thursday from nearby Mesa View Middle School and transported to Calimesa Elementary School in Yucaipa, where they were reunited with their parents, according to the Riverside County Sheriff's Department.

Authorities in Calimesa give an update on the Sandalwood Fire that destroyed dozens of structures in Riverside County.

Multiple agencies assigned a combined 250 firefighters to the incident, supported by two air tankers and a helicopter that were dropping Phos-Chek and water at the scene.

The flames were threatening the power grid and a railway in the area, Cal Fire said Thursday. A care and reception center was established at the Norton Younglove Multipurpose Senior Center, located at 908 Park Avenue in Calimesa.

A red flag warning had been in place in Riverside County and throughout the Southland since early Thursday morning.

Also in Riverside County, the Wolf Fire had grown to 75 acres by Friday afternoon and was 25% contained.