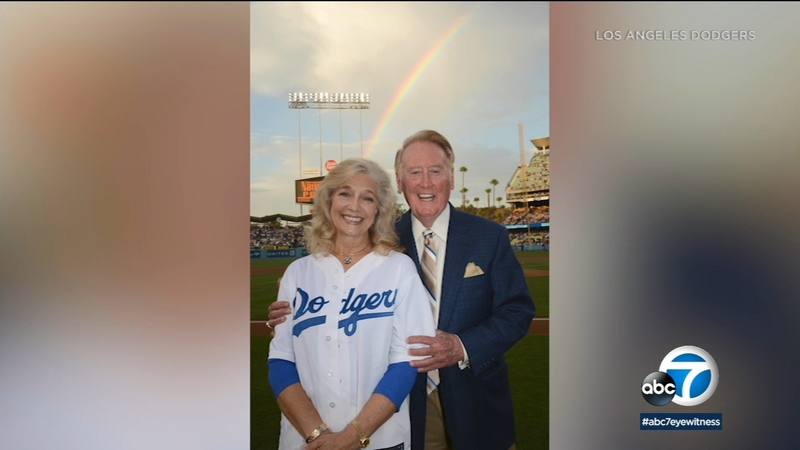 LOS ANGELES (KABC) -- Sandra Scully, the wife of Dodgers' Hall of Fame announcer Vin Scully, has died at the age of 76, the team announced.

Sandra Scully died Sunday evening at Ronald Reagan UCLA Medical Center in Los Angeles after battling ALS over the last several years, according to the Dodgers.

"We are saddened to learn of the passing of Sandi Scully, the loving wife of Vin and a dear member of the Dodger family," said Dodgers president and CEO Stan Kasten. "Sandi was Vin's biggest fan and was always there in loving support of him at Dodger Stadium until she began her battle with ALS. She was truly Vin's and the Scully family's rock, and she will be dearly missed."

Sandra Scully frequently accompanied her husband when he broadcast games at Dodger Stadium. Scully's 67-year run with the Dodgers ended with his retirement in 2016. She was in the booth for his final home game on Sept. 27. He waved to the cheering crowd as his wife stood and smiled next to him. Scully turned 93 in November.

The Dodgers say donations can be made to the Department of Neuromuscular Disease at UCLA/ALS Research in Sandra Scully's name.