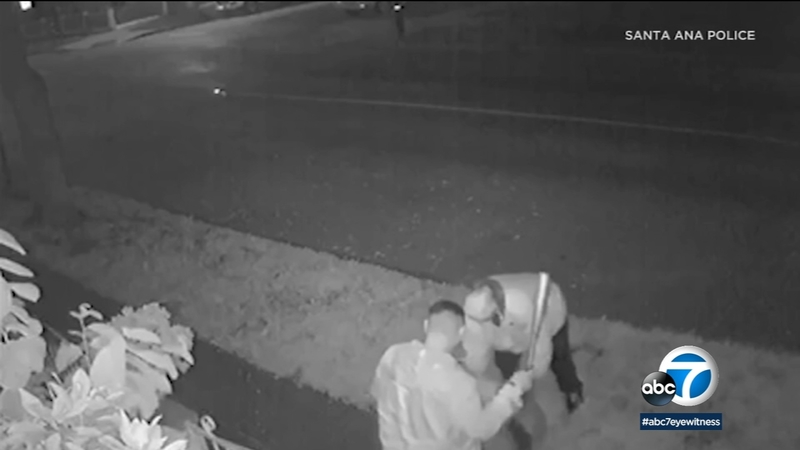 SANTA ANA, Calif. (KABC) -- Police are looking for four suspects accused of violently beating two teens - one of them with a bat.

Corporal Anthony Bertagna with the Santa Ana Police Department said it happened just before 10 p.m. on Dec. 30, and investigators are worried because the four suspects behind the brazen attack were still on the run a week-and-a-half later.

"If they're doing this to these kids, they're going to do it to elderly women, kids throughout the various communities and that's something that is unacceptable by us," Bertagna said.

Detectives said video recordings from homes on Wilshire Avenue near Ross Street showed it all go down.

The two friends were walking along the street when a car pulled up to them - an older, tan Honda Accord with a sunroof. The suspects asked the victims whether they had gang ties.

"They approach the kids. They put the windows down, 'Where you from?' They told them, 'We are not gang members.' That's when the suspects get out," Bertagna said.

Police said the suspects asked the victims for their things, the teens refused and ran. The accused attackers gave chase, caught up and that's when the violence began.

"One suspect, using the bat to assault them and then they take property from the victims," Bertagna said.

One victim tried to speak up. Police said his attacker returned with more blows, then took off with the victim's IPhone.

"We believe that our children should be able to walk through their community with their friends going from house to house without being physically assaulted and robbed of their possessions," Bertagna said.

Police asked anyone with information on this attack to give them a call. That person can remain anonymous by calling 1-855-TIP-OCCS and if the tip leads to an arrest they can get monetary compensation, up to $1,000.
Report a correction or typo
Related topics:
santa anaorange countyassaultgang violenceattack
Copyright © 2021 KABC-TV. All Rights Reserved.
More Videos
From CNN Newsource affiliates
TOP STORIES