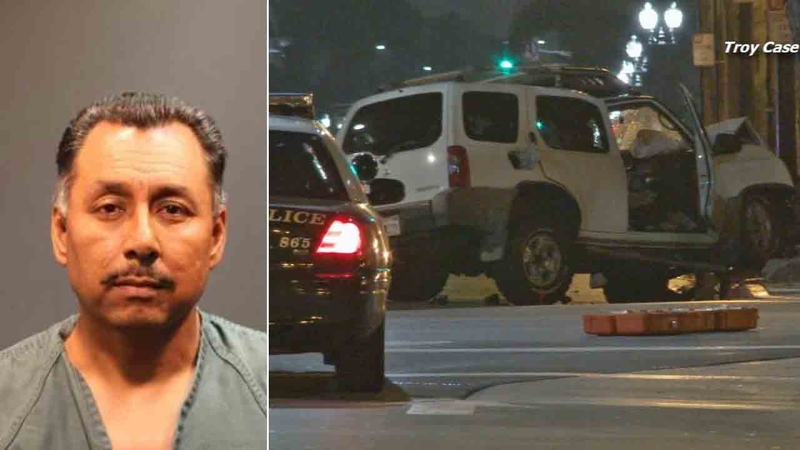 SANTA ANA, Calif. (KABC) -- A suspect is in custody after a hit-and-run sent a Santa Ana couple to the hospital Monday night. Police say the suspect has been arrested before for the same crime at the same location by the same officer.

Authorities said a couple in a 2000 Nissan Xterra was traveling down the 700 block of N. Broadway when the SUV was struck by a 1998 Dodge Stratus at the intersection of N. Broadway and Santa Ana Boulevard at 6:52 p.m. The impact caused the Nissan to jump the curb and slam into a tree. Firefighters had to free the couple in their 50s after they became trapped in the SUV.

The male driver of the Nissan and his wife were rushed to a local hospital. Officials say the man was in serious but stable condition, and the woman was in grave condition. Police say she is not expected to survive.

The driver of the Dodge Stratus, later identified as Guillermo Velasquez Flores, 45, of Santa Ana, fled the scene.

"The suspect vehicle did not stop, did not call, did not render aid," Santa Ana police Cpl. Anthony Bertagna said.

Police had a break in their investigation. Debris left behind included the suspect's license plate. A tip also helped police track down the suspect's car about a mile from the hit-and-run.

Flores was taken into custody near Willits and Raitt streets around 12 p.m. Tuesday.

"They believe he was the only one in the vehicle and he did know, in fact, that he hit somebody," Bertagna said.

In a strange twist, an investigating officer handling this case had dealt with Flores in 1995, at the same intersection, also involving a hit-and-run. Police say he was arrested after hitting and injuring a pedestrian in that case.

"The same location, and the same investigator that makes the arrest, that's the first time I've ever heard of it," Bertagna said.

The victim in the 1995 case suffered minor injuries.

The investigation is ongoing. Anyone with further information was asked to contact Investigator Bao at (714) 245-8214 or Orange County Crime Stoppers at (855) TIP-OCCS.