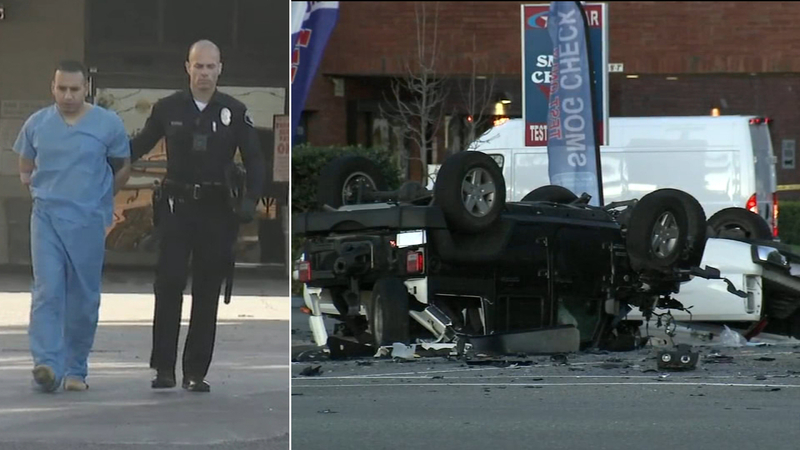 SANTA ANA, Calif. (KABC) -- At least four people are dead and a driver has been arrested on suspicion of drunk driving following a violent two-vehicle crash in Santa Ana early Sunday.

A black Jeep was traveling westbound on 4th Street and a white Chevrolet pickup truck was traveling southbound on Tustin when the Jeep ran a red light. The cars then collided and flipped multiple times, one of them bursting into flames, police said.

An off-duty firefighter happened to be in the area at the time, along with a nurse, and was able to quickly put out the flames. The nurse was also able to render aid at the scene.

Four people inside the truck were killed, and the driver of the Jeep was transported to a nearby hospital initially in critical condition.

Authorities said that 28-year-old driver, identified as Vincent Michael Calvo of Buena Park, appeared to be extremely impaired at the scene. He was later released from the hospital and arrested on suspicion of DUI. He faces four murder counts, as well as felony DUI. His bail was set at $4 million.

Meantime, coroner officials were working to remove the victims from the wreckage hours after the crash. Authorities said there may be a fifth body inside the badly mangled truck.

"I think the hardest part is going to be the coroner's job, trying to preserve evidence while at the same time getting these victims out of their vehicle," explained Santa Ana PD Cpl. Anthony Bertagna.