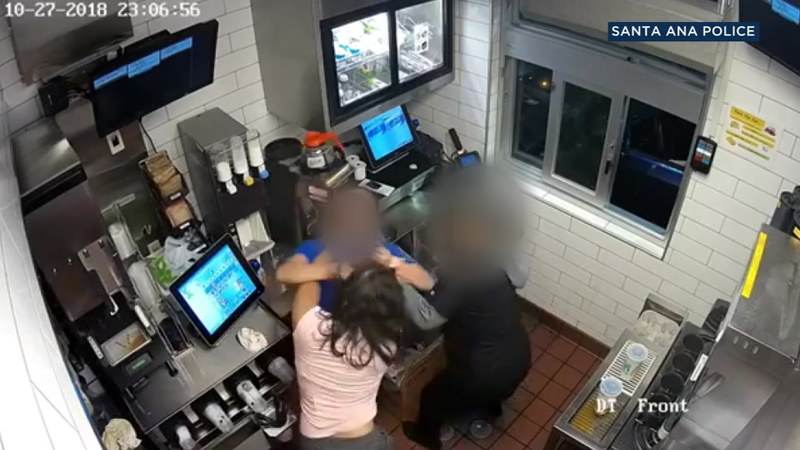 SANTA ANA, Calif. (KABC) -- Police are looking for a suspect in a violent attack on a Santa Ana McDonald's manager after the suspect requested ketchup.

According to authorities, on Oct. 27 a woman entered the employee back door of the restaurant, located on North Bristol Avenue, around 11 p.m. and asked workers for ketchup.

The store manager informed the woman that she could not be in the employee area of the McDonald's, and the woman became violent, kicking, punching and choking the manager.

"The manager tells her, 'I'll be glad to help you, you just need to go up front,' and for whatever reason she took it upon herself to assault the manager," said Santa Ana Police Cpl. Anthony Bertagna.

Video of the incident shows the suspect dressed in a light pink T-shirt and dark gray pants. The woman can be seen on video slamming the manager's head against a drink machine with her hands around her neck.

Other employees rushed to the manager's aid as the fight moved toward the drive-through window.

The suspect, with her hands still locked around the manager's neck, continued to shove the victim violently into walls and beverage machines, spilling drinks and knocking items to the floor while a customer waited in a vehicle at the window.

At some point, the video appears to show a man clad in a gray hoodie rush into the restaurant through the same back door and escort the suspect, who appears to calmly gather herself, out.

"There is no reason that any employee at any business should be assaulted by a patron, much less over not getting enough ketchup," said Bertagna.