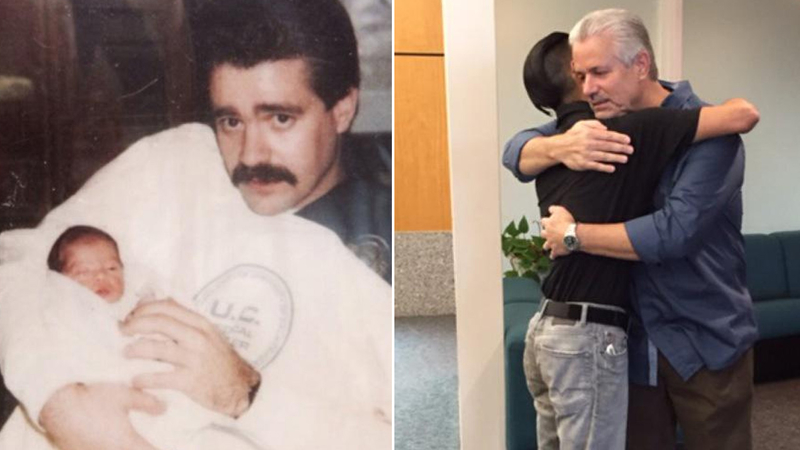 "I hoped that someday I would see him again," Buelna said.

The two first met 25 years ago when Barton was just four hours old, in what some would call a miracle encounter. It was Nov. 21, 1989 and Buelna was on duty in Santa Ana.

"It was like a sound of a very low meow, like a cat or something," Buelna said, referring to a sound coming from behind a garbage dumpster.

Buelna started moving trash around and then made the shocking discovery.

"I noticed the umbilical cord and he was covered, he still had all the mucus and stuff and all the trash and gravel was sticking to him," Buelna said. "I tried to give him a tiny little bit of breath and he reacted a little bit."

A sketch of his 19-year-old biological mother, later identified as Sarina Diaz, was released to the public. She was later arrested for child endangerment and attempted murder.

"Adam" was adopted by Elizabeth Barton and Daniel Fernandez of Orange County and renamed Robin.

"It's been an honor and privilege to be your mom," Elizabeth Barton said.

Meanwhile, Robin Barton said living with his adoptive parents has been "wonderful."

"I was blessed with a great family," he said.

Recently, he and his parents met the officer who rescued him. Buelna said it was a very emotional meeting.

"I had the opportunity to shake his hand and look in his eyes and say, 'Thank you for saving his life,'" Daniel Fernandez said.

Robin Barton's biological mother was sentenced to three years in prison for child endangerment and attempted murder. He says he's trying to find her, adding that it'll help provide some closure and will also give him the opportunity to tell her he forgives her.

"I'm not angry or upset with her, and I forgive her because she was a young woman in a very compromising position," Barton said.