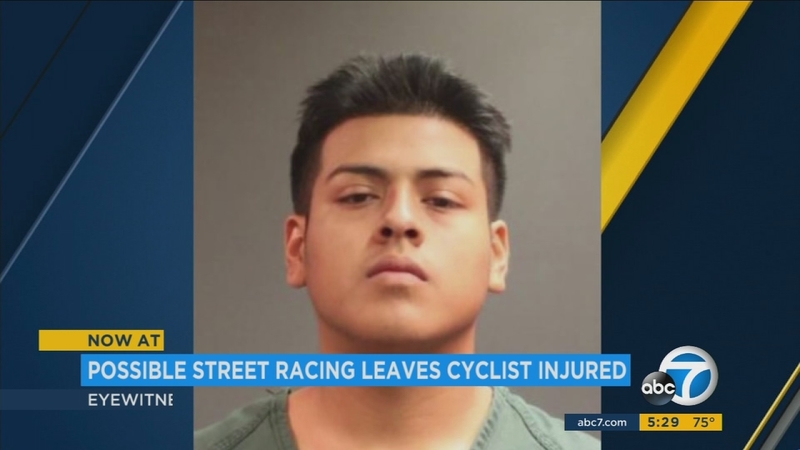 SANTA ANA, Calif. (KABC) -- A 20-year-old man was arrested Friday on suspicion of felony hit-and-run that left a homeless man in critical condition in Santa Ana.

Authorities said around 9:40 p.m. Thursday, officers responded to the intersection of 17th and Fairview streets on reports of a hit-and-run crash.

Witnesses told officers that two cars, a white truck and black car, were racing northbound on Fairview Street from the Civic Center. The driver of the white truck struck a bicyclist who was riding near the curb on Fairview, north of the riverbed.

The bicyclist was knocked down and sustained significant injuries, authorities said. The victim, a homeless man police believe lives in the riverbed, was taken to the hospital in critical condition.

Around 11:30 p.m., Christopher Rosalino Carrasco, of Garden Grove, drove a 2013 white Chevrolet truck back to the scene of the crash and contacted investigators. He told authorities that he was involved in the crash.

"He told his sister what happened. She did the right thing. She told him to get into his car, go back to the scene, talk to the officers and tell them what happened," SAPD Cpl. Anthony Bertagna said.

Authorities interviewed him and arrested him based on his information and evidence at the scene. Carrasco was booked into the Santa Ana Police Department's jail on suspicion of felony hit-and-run collision with injuries. He is being held in lieu of $50,000 bail.

One of Carrasco's sisters, who did not want to go on camera, said she does not believe he was racing and that the incident was just an accident. A longtime friend of Carrasco's agreed.

"Chris is like a responsible kid. He wouldn't do something so reckless and put other people's lives in jeopardy," David Romero said.

Santa Ana police commend Carrasco's sister for telling him to go back, but it will be up to the Orange County District Attorney's Office to decide if that makes any difference in the case.

"In all accounts, my guess is if he would have stayed at the scene this would have been nothing but a tragic accident," Bertagna said.

Authorities added that the bicyclist was wearing dark clothes, did not have a light on his bike and may have made a move that caused the crash. Carrasco is scheduled to appear in court on Monday.
Related topics:
santa anaorange countyarresthit and runhomelessstreet racingbicycle
Copyright © 2021 KABC-TV. All Rights Reserved.
TOP STORIES
53 cases of new R.1 COVID variant detected in CA
Suspect arrested in assault of Chapman University student on campus
Legendary Dodgers broadcaster Jaime Jarrín retiring
Woman wounded in shooting by Long Beach school safety officer
Gabby Petito's family speaks as FBI manhunt continues
Pfizer submits data to FDA on its COVID vaccine for kids 5-11
CA man warns others after being harassed over dinosaur flag
Show More
Abdul-Jabbar calls for unvaccinated players to be removed from teams
Deadly crash prompts NB 710 Freeway partial closure in Long Beach
Our America Equity Report
'Dancing with the Stars' first elimination
Man, his father charged in connection with 3 East LA murders
More TOP STORIES News