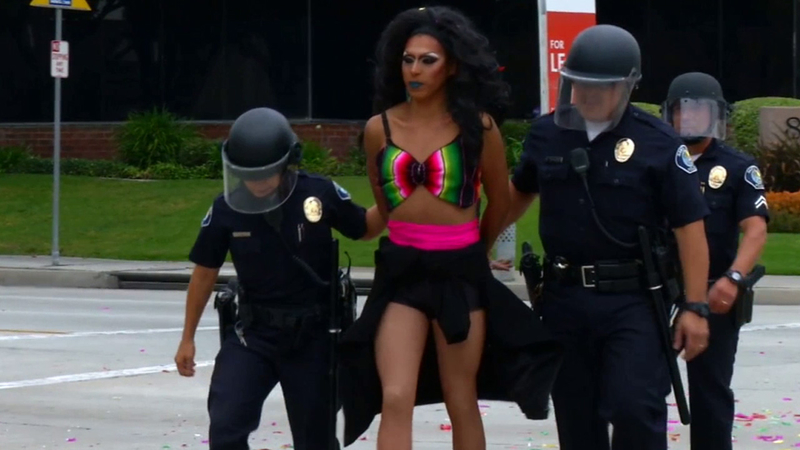 SANTA ANA, Calif. (KABC) -- About 70 protesters, some of them chained together, blocked N. Flower Street and W. Civic Center Drive in front of the Central Justice Center in Santa Ana Thursday morning.

The group is calling for an end to the detention and deportation of undocumented immigrants, particularly those who are part of the LGBTQ community.

"There are LGBTQ folks who are undocumented, and right now there's an urgency to get trans women out of these detention centers," said Jorge Gutierrez, the director of the Familia: Trans Queer Liberation Movement.

After declaring an unlawful assembly, officers arrested five people who refused to move out of the street. They were identified as Sandra Paola Jara-Riveros, 33, of Pasadena, Isais Celestino Noyola, 36, of Vallejo, Mariela Martinez, 22, of Los Angeles, Jorge Hernandez, 24, of Oakland and Jeffrey Christopher Neel, 42, of Anaheim.

All five suspects were booked at the Orange County Jail on obstruction and failure to disperse charges. They are each being held in lieu of $500 bail.

"They have a right to speak their opinions, however they don't have a right to take over the middle of a busy intersection," said Santa Ana police Cpl. Anthony Bertagna.

The protesters say there's an urgency to release members of their community because they believe they're being mistreated.

"Trans women are being thrown in solitary confinement. They're still being sexually abused, physically abused. They're not being respected for their gender identity," Gutierrez said.

U.S. Immigration and Customs Enforcement (ICE) sent Eyewitness News the following statement: "ICE has a strict zero tolerance policy for any kind of abusive or inappropriate behavior in its facilities and takes any allegations of such mistreatment very seriously."

The federal law enforcement agency says they are "committed to upholding an immigration detention system that prioritizes the health, safety, and welfare of all those in our care in custody, including lesbian, gay, bisexual, and transgender (LGBT) individuals."

Protesters say they plan to wait outside the Santa Ana Police Department until the five people who were arrested Thursday morning are released.