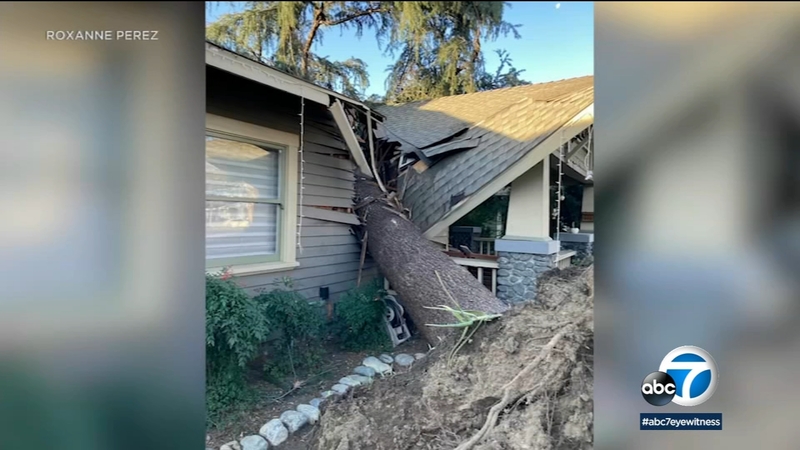 POMONA, Calif. (KABC) -- A family in Pomona has lost their home to a fallen tree in the latest round of Santa Ana winds that have already caused major damage in a number of Southern California neighborhoods.

Powerful Santa Ana winds blew through the Perez family's Pomona neighborhood over the weekend and toppled their tree, onto their home, while they slept.

Perez says they trimmed the tree with the hopes it would prevent an incident from happening. The damage was so severe that their home has been red-tagged, meaning it's unsafe to live in.

Clean-up continues and thousands of homes remain without power across Southern California after strong winds wreaked havoc over the weekend.

A GoFundMe page has been set up by their neighbors to help them rebuild.

"My husband and I are just floored by the people that have, like, come to support us," said Perez.

The Santa Ana winds have wreaked havoc throughout Southern California. Trees were blown over causing significant damage. In Claremont, the city estimates more than 300 trees were toppled by the powerful winds.

At its city council meeting Tuesday tonight, Claremont was expected to ratify a state of emergency that'll give them access to state funds to help pay for repairs. The city created an online wind storm information website with an online damage report for residents to report damage.

There were no reports of any serious injuries.