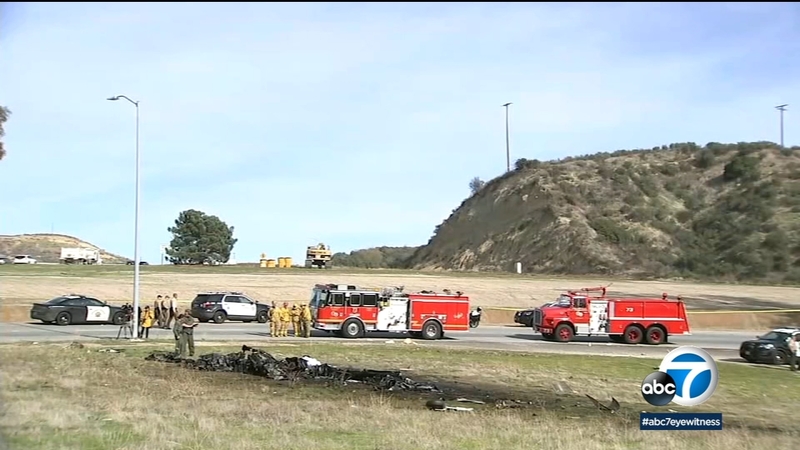 SANTA CLARITA, Calif. (KABC) -- A small plane crashed and erupted in flames Saturday morning near the 14 Freeway in Santa Clarita, killing the only person on board, the Los Angeles County Sheriff's Department said.

The single-engine aircraft went down shortly after 10 a.m. at the Newhall Avenue exit in Newhall. Flames ignited after the plane struck a tree, according to a California Highway Patrol log.

The pilot made a mayday call and radioed air traffic control shortly before the crash saying he couldn't see anything inside of the cockpit because of smoke and was going to try to land the plane.

"I hear a spitter-sputter from a plane and looked up and realized it didn't look right," said Brett Fox, witness.

Firefighters rushed to the scene to try to save anyone on board.

The plane was a home built TM-1 Thunder Mustang, according to the Federal Aviation Administration. It had taken off from Van Nuys Airport but it was unclear where the pilot was headed.

"He definitely knew he was in trouble. His first thought was probably to find a road, somewhere safe to land but when there's cars like that and trouble, you have nowhere else to go," said Aaron Tapia, witness.

Witnesses' video showed a large plume of black smoke rising above the scene. The mangled wreckage was seen in a grassy area surrounded by the cloverleaf off-ramp, which was closed after the incident.

"He ended up hitting the tree and going right into the side of that mountain by the on-ramp, missing the freeway...he's a hero because there's so much traffic," said Laura Tapia, witness.