It's one of the most coveted pieces of land not just in Santa Monica, but all of L.A. County: The Fairmont Miramar Hotel at Ocean Avenue and Wilshire Boulevard overlooking Santa Monica Bay.
KABC
By Josh Haskell 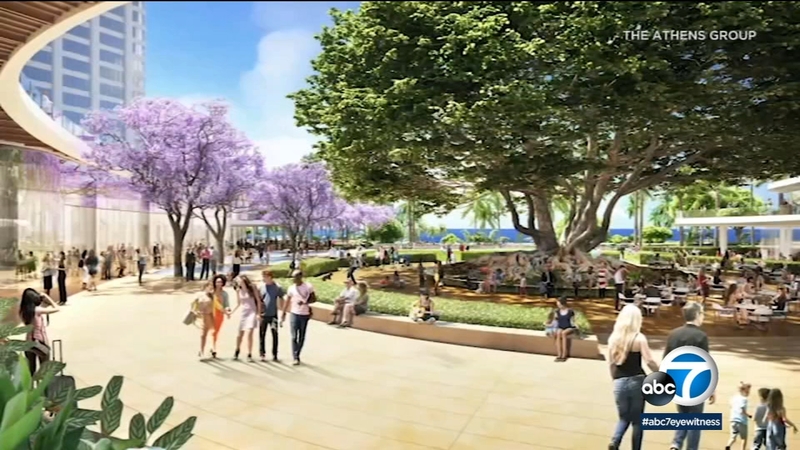 SANTA MONICA, Calif. (KABC) -- It's one of the most coveted pieces of land not just in Santa Monica, but all of L.A. County: The Fairmont Miramar Hotel at Ocean Avenue and Wilshire Boulevard overlooking Santa Monica Bay. A half-billion dollar re-development of the property, 10 years in the making, was approved by the Santa Monica City Council Tuesday night.

"This project could give us another 100 years of the Miramar. I don't buy too big. I do not buy too big. Santa Monica is bigger at 90,000 people than many cities at half a million. And what I mean by that is because it has done things that have become famous worldwide," said former Santa Monica Mayor Nat Trives.

Trives is a longtime Santa Monica resident and former mayor who believes the time has come to not just renovate the historic property, adding 11 rooms bringing the total to 312, but transform the land to include 60 condos, 14,000 square feet of open space, new retail, and 40 units of affordable housing. But resident Elizabeth Van Denburgh says the approved plan resembles a fortress with an 80 foot wall on the north side on California Avenue and a 109 foot wall on the east side on 2nd Street.

"We don't think it has enough affordable housing. We don't think the public open space is appropriate, we need more and we don't think the historic preservation is comprehensive, so we're looking for something that is better for the city in the long run and get the best design and circulation for the neighborhood," said Van Denburgh, the chair of the Wilshire Montana Neighborhood Coalition.

Those opposed to the project are also concerned about the six driveways that would be located around the proposed property, and what increased vehicle traffic would mean for the residential neighborhood that surrounds the Miramar.