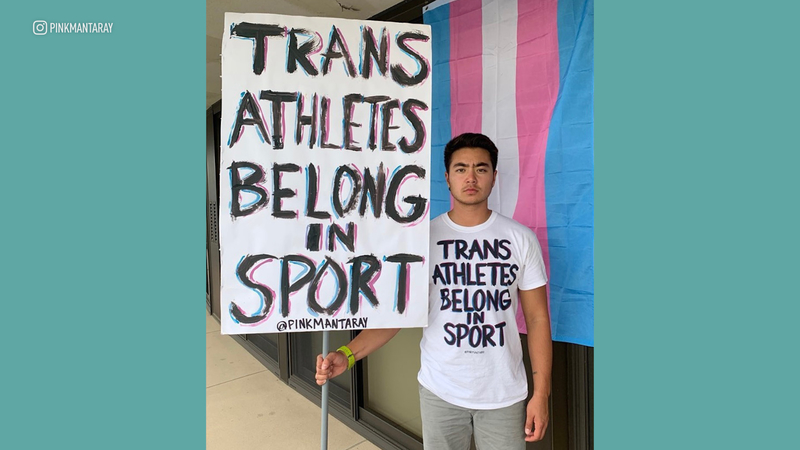 WASHINTON, D.C. -- If you Google "transgender athlete," Schuyler Bailar wants his name to come up.

"Not me as in 'Schuyler Bailar,' that doesn't matter," he said. "I just need something to come up when that kid in the middle of nowhere types in 'transgender athlete.' I need a face to come up that says, 'Hey, you can do this, too.'"

Bailar was assigned female at birth and initially recruited in high school to swim on Harvard's women's team. But when Bailar took a gap year before college to receive treatment for an eating disorder, he realized it was okay to slow down and introspect. It was during this time Bailar realized he's transgender. But he had no idea what that would mean for his future swimming career.

When Bailar was coming out, he looked for people like himself online. But when his Google searches turned up no results, he concluded that it couldn't be done - transgender athletes couldn't compete on the team that aligns with their gender identity.

But when he read the NCAA's official rules, he realized his assumption was simply not true - there just had been no one before him. So Bailar took the dive and became the NCAA's first out transgender athlete to compete in any sport.

Bailar's decision to swim for Harvard's men's team was not made lightly. By the time he was admitted into college, he had already set the national age group record for 15 to 18-year-olds and was projected to be an NCAA champion. He initially declined a spot on the men's team.

"I was so stuck on all the success I had built for myself competing as female ... and swimming as a man would just be instantly taking away all that," he said.

But a conversation with his dad changed everything.

"'Schuyler, you've already gotten all these things: the national records, the national's teams, the competing with the Olympians, and where are you? Miserable, in a treatment center, not knowing who you are,'" Bailar recalls his dad saying.

"I've watched you grow up, and the thing that grates against you the most is inauthenticity. Whenever you feel inauthentic, you can't stand it. So, I don't know how you're going to move forward (competing as female) if you feel this inauthentic.'"

In that moment, Bailar knew his dad was right.

"I should take this risk to really be happy, and be myself, and be (authentic) everywhere I can be," he said.

To move forward, Bailar gave up his planned future for the life that was truly his.

Bailar graduated from Harvard in 2019 and finished his swimming career in the top third of all athletes in D1 100-meter breast stroke and D1 100-meter butterfly. He also finished in the top 15 percent of all divisions.