KABC
By Elissa Harrington
SAN FRANCISCO (KABC) -- Thousands of jellyfish-like creatures have washed ashore in at least two places along the Bay Area shoreline. It's very unusual for this time of year.

Beach-goers were watching their steps Tuesday as they walked on the sand at San Francisco's Ocean Beach. They're worried about the blue sea creatures scattered on the sand that washed ashore on Monday.

While the sight may seem bizarre to onlookers, Rich Mooi of the California Academy of Sciences says it's not.

"They are not dangerous at all," he said. 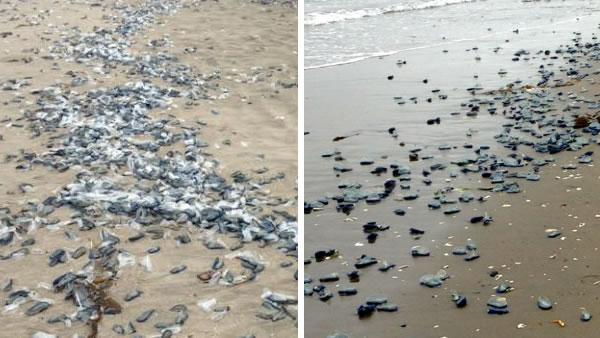 Thousands of blue, jellyfish-like creatures have washed ashore in at least two places along the Bay Area shoreline.

Velella Velella is the scientific name for these creatures. They're related to a jellyfish but don't have a harmful sting. They float and sometimes wash up by the thousands -- even millions.

"It's a little unusual to have this bloom, this huge number of velella coming up this late in the summer," Mooi said.

Velellas are also called "by the wind sailors" because of their small, transparent fins that act as sails.

"And when the wind blows on shore, the wind will blow against the sails and push the little guys up onto the shoreline," Mooi said, adding that there's an abundance of velellas out there, and something like this won't hurt the species.

It's strange for so many to wash up this late in the season, but there's plenty that will reproduce and come back next year.