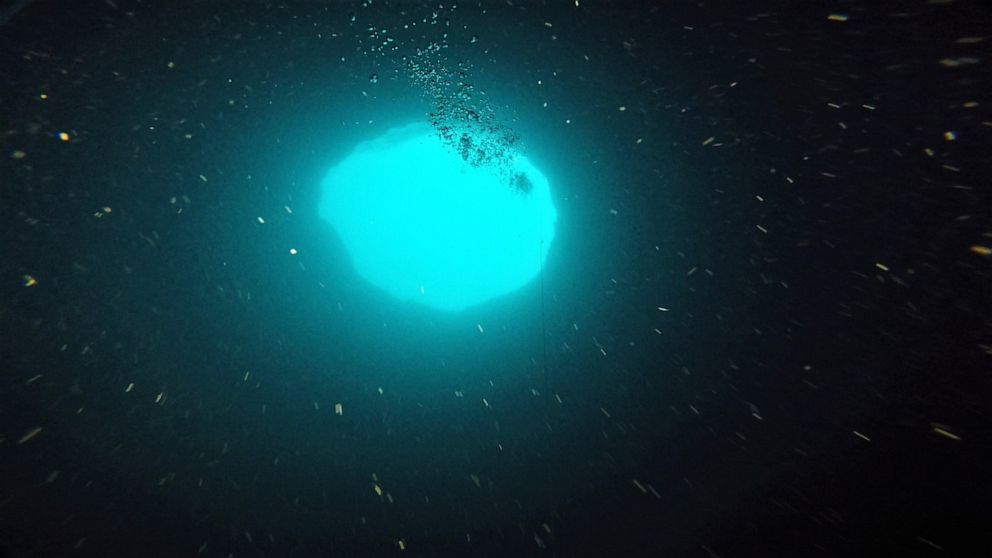 Scientists are flocking to Florida's Gulf Coast for a glimpse of a mysterious 425-feet-deep "blue hole" on the ocean floor.

The glowing mystery hole, about 155 feet below the water's surface, is similar to the sinkholes seen on solid land, according to the National Oceanic and Atmospheric Administration.

The site, dubbed the "Green Banana," has been a hot topic for scientists and deep-sea explorers who've been hoping for a glimpse of the phenomenon from afar.

Surprisingly, the first reports of blue holes came from fishermen and recreational divers, not scientists or researchers. In general, the holes appear to host diverse biological communities full of marine life, including corals, sponges, mollusks, sea turtles and sharks.

NOAA scientists already have collected 17 water samples from the area surrounding the hole along with four sediment samples.

Remarkably, they also discovered two dead but intact smalltooth sawfish, an endangered species, at the bottom of the hole, according to NOAA. Remains of one of the animals were recovered for examination.

NOAA scientists plan to embark on a new mission to a second, deeper area of the hole in August. That mission will consist of a team of scientists from Mote Marine Laboratory, Florida Atlantic University, Georgia Institute of Technology and the U.S. Geological Society, according to NOAA.

Researchers are interested in studying the seawater chemistry in the holes for its unique qualities.

"Little is known about blue holes due to their lack of accessibility and unknown distribution and abundance," NOAA said in a statement. "The opening of a blue hole can be several hundred feet underwater, and for many holes, the opening is too small for an automated submersible."

Researchers don't know much about blue holes, but scientists are hoping to learn if the holes are connected to Florida's groundwater or if there is groundwater intrusion into the Gulf of Mexico.