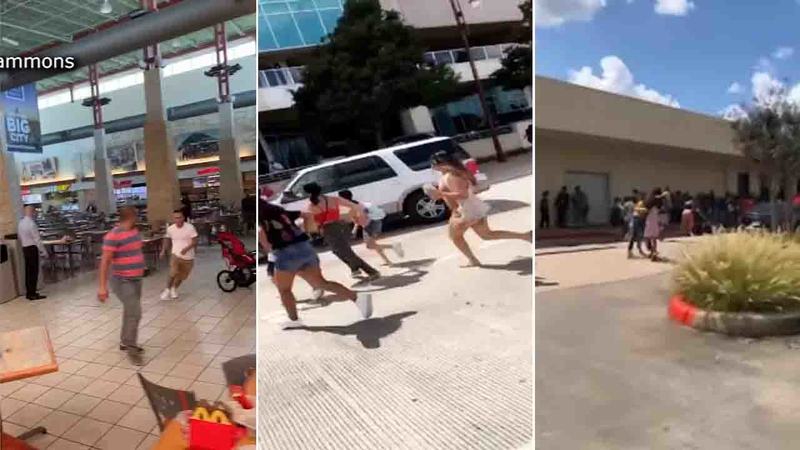 Search for masked man who made threat at Memorial City Mall

HOUSTON, Texas -- A mall in Texas will reopen Monday after a shooting scare sent people running for the exits over the weekend.

It initially appeared that there was an active shooter, but officials say there no shooting occurred. Other reports circulated of a man setting off firecrackers inside the mall, but authorities later gave an update saying no fireworks were discharged.

Shoppers who fled will be allowed to return to the mall to retrieve the items they left behind.

Memorial City Mall will re-open today so people can come back to get items left behind after a shooting scare. Police say there was no shooter, but there was a reason for concern. pic.twitter.com/0oowJCoIVJ

Video shared with ABC7's sister station ABC13 showed the hundreds of customers who started running when they heard a possible shooter was on the loose near the food court.

Some people realized they could not get out.

"I am pretty shaken. I am here in the fitting room," one person said.

Officers were inside the mall moments after the first shoppers ran to safety.

Police eventually learned there was no shooting, however there was real cause for concern.

During a press conference, Harris County Precinct 5 Constable Ted Heap said surveillance video shows the suspect at 3:12 p.m. Sunday going up the escalator to the movie theatre. A few minutes later, the suspect was seen wearing a red half-mask. He took the escalators down to the food court area, where he jumped on a table and declared he was going to kill himself.

"He had something in a bag, and that point he had thrown the bag. At this point we have chaos. People started fleeing. He actually exited out the south entrance and headed in this direction over here towards these apartment complexes," Heap said.

Deputies say they have numerous witnesses, but at this point, the suspect hasn't been found. Authorities describe him as a white male in his teens or early 20s.

Police consider this a terrorist threat.

HPD officers are on the scene at Memorial City Mall following up on reports of a possible active shooter. No threat has been found at this time but officers are still continuing a diligent search of the area. More information will be provided as it becomes available. #hounews

Update: There was no active shooter or fireworks discharged at Memorial City Mall. An media briefing will be carried live on Periscope.

At least two people were injured during the incident, police say.

"Two injuries that occurred, fairly minor one of them was a 16-year-old boy and his mother. They were taken to the hospital they got caught up in the mass hysteria of the exit. It appears we have a minor ankle or leg injury and the mother was stepped on a few times on her back as she was trying to help her son," said Houston police's Cheryl Victorian.

According to Houston police, they are investigating the incident as a terroristic threat.

Moments following the scare at Memorial City Mall, Houston police responded to reports of shots fired at a Walmart located at the 9400 block of W. Sam Houston Parkway South.

Upon arrival, HPD said they could not find evidence that indicated shots were fired.

Walmart released the following statement regarding the incident.

"We've been partnering closely with police to investigate the unknown noise heard in our store earlier today. We're thankful for the safety of our customers and associates, and have now reopened."