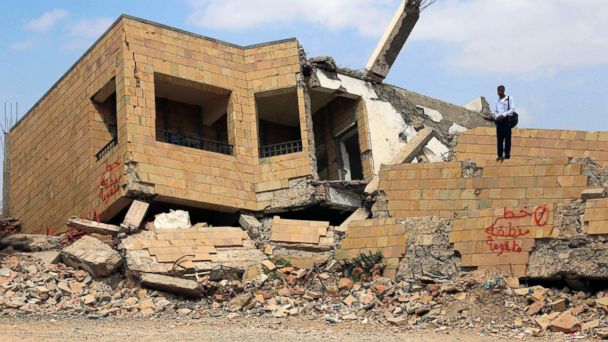 It's the first time a War Powers resolution has passed both chambers of Congress to pull back American forces from a conflict where the commander-in-chief has deployed them. The House approved the measure last month, and together sets up a showdown with the White House and potentially Trump's first veto.

The resolution passed with mostly Democratic support and a handful of Republicans crossing the aisle. The final vote was 54-46.

It will have to pass the House again because the House version passed with amendments that were not included in the Senate's version.

That is expected to happen, given the House vote's margin in February, when 18 Republicans joined all of the Democrats in a 248 to 177 vote.

Still, Congress is not likely to override Trump's expected veto, lacking the necessary two-thirds majority in the House and the Senate.

"This is an inappropriate and counterproductive measure," McConnell said.

"From the outset, let me say this: I believe it is right for senators to have grave concerns over some aspects of Saudi Arabia's behavior, particularly the murder of Jamal Khashoggi. That is not what this resolution is about," McConnell said.

Democrats, however, lauded the resolution on the Senate floor.

"Today, we begin the process of reclaiming our constitutional power by ending U.S. involvement in a war that has not been authorized by Congress and is clearly unconstitutional," Sen. Bernie Sanders, I-Vt., said.

Under the constitution, Congress has the authority to declare war, but it has never used the War Powers Act of 1973 to pull back American forces from a conflict.

The White House lobbied hard in late 2018 to persuade lawmakers to kill the resolution, succeeding in the then-Republican controlled House, but failing in the Senate after Republicans were upset about how the administration has handled the murder of Khashoggi, a Washington Post columnist, by Saudi officials inside their consulate in Istanbul, Turkey.

"The premise of the joint resolution is flawed," a White House statement said in February, arguing that the U.S. military role is "limited" to defense cooperation and "has not caused United States forces to be introduced into hostilities." Trump's senior advisers would recommend he veto it, the statement added.

"We're literally telling the Saudis what to bomb, what to hit, and what and who to take out," said Sen. Mike Lee, R-Utah, before the vote, calling the administration's definition of hostilities "unreasonably, unsustainably, indefensibly slim."

Beginning under the Obama administration, the U.S. has provided military support for Saudi Arabia, the United Arab Emirates and their coalition backing the internationally recognized government of Yemen, a country of more than 28 million people on the southwestern corner of the Arabian Peninsula and on the brink of famine after years of conflict. The coalition is fighting the Houthis, a militant group that took over the capital and has increasingly been backed by Iran in their fight to control the country.

That assistance has included midair refuels for coalition warplanes, training and advising for troops and on aerial targets, selling weapons and ammunition and sharing intelligence. While the Pentagon announced the midair refuels ended in Nov. 2018, the other activities have continued.

A bipartisan group of senators have said that involvement is "unconstitutional, unjustified, and ultimately immoral," as Lee said Wednesday. He and Chris Murphy, D-Conn., and Sanders introduced the legislation.

Opposition to U.S. involvement in Yemen has brewed for years, especially over the dire humanitarian situation and the coalition's indiscriminate bombing of civilians and civilian infrastructure. But outrage over Khashoggi's murder and Trump's defense of Saudi Arabia and its young crown prince, Mohammed bin Salman, has galvanized support for the Yemen resolution in recent months.

The administration has fueled that outrage by refusing to meet a Congressional deadline to investigate what role Prince Mohammed played in Khashoggi's killing and by stonewalling in closed door briefings with lawmakers about how the administration intends to hold Saudi Arabia accountable -- including as recently as last week.
Report a correction or typo
Related topics:
abc newsnational
Copyright © 2020 ABC News Internet Ventures.
More Videos
From CNN Newsource affiliates
TOP STORIES