Democratic presidential candidate Joe Biden's choice to have Sen. Kamala Harris as his running mate is being viewed as historic for women of color.
KABC 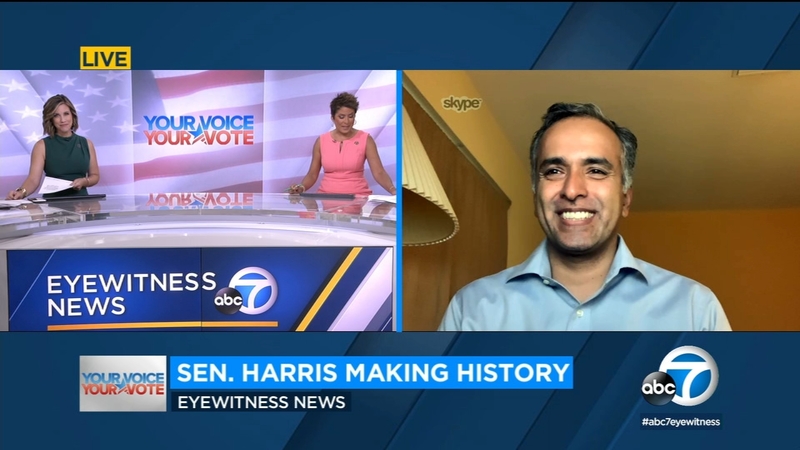 LOS ANGELES (KABC) -- Democratic presidential candidate Joe Biden's choice to have Sen. Kamala Harris as his running mate is being viewed as a historic event on many levels.

Karthick Ramakrishnan, professor of public policy and political science at University of California, Riverside, joined ABC7 via Skype to talk about the significance of Harris's candidacy, especially to the Asian-American community.

"We're seeing a lot of excitement both among voters and among donors," said Ramakrishnan. "I think that's important to emphasize as well."

Several Democrats in Southern California congratulated Sen. Kamala Harris and expressed their enthusiasm after she was selected to be Joe Biden's running mate.

Professor Ramakrishnan has done research that has shown a lot of people in the U.S. think of Asian-Americans as Chinese or Japanese, but there's been an incredible growth with Indian-American, Pakistani and other South Asian communities. He points to the long-standing 'one drop' rule in America.

"This is a legacy of slavery and Jim Crow where even if you have one drop of Black blood you are only considered Black," said Ramakrishnan. "I think this is an important moment for America to have a more complicated understanding of race and to understand that people can be both Black and Asian."

The number of Asian-American voters has grown exponentially over the past two decades. Ramakrishnan says he doesn't expect that trend to end.
"What we saw in 2018 was a big jump in the Asian-American vote and I think we'll see an even bigger jump in 2020. Part of it is due to the historic nature of Harris's candidacy but it's also Donald Trump. He helped turn out the vote, either for him or against him, and it's likely to be the same this year," said Ramakrishnan. "The only caveat I would say is because of the coronavirus and questions about vote by mail. That might suppress the vote a little bit but there are a lot of factors driving people, energizing them to vote."

Who is Kamala Harris? What to know about the California senator
EMBED More News Videos

Kamala Harris has represented California in the U.S. Senate since 2017. Harris served two terms as the district attorney in San Francisco and was California's attorney general, the first woman of color to hold that office.

When asked if Harris' presence in the race could begin a wave of more Asian-American candidates, Ramakrishnan said absolutely.

"When you talk about historic candidates who are a first in something it immediately inspires other to do the same. So just like Hillary Clinton, her candidacy inspired so many women to run for office, I think we're going to see a lot of women of color," said Ramakrishnan.