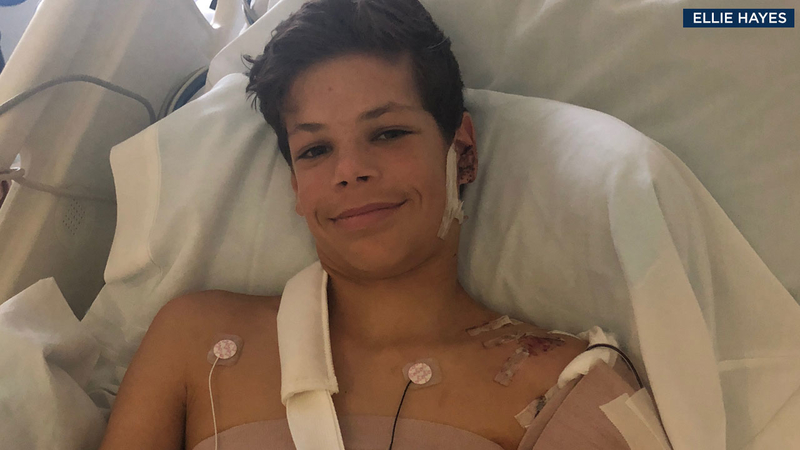 ENCINITAS, Calif. (KABC) -- A 13-year-old boy bitten by a shark in the San Diego area was identified Monday and is expected to make a full recovery.

This news comes as officials prepare to reopen Beacon's Beach in Encinitas, where the attack happened on Saturday. The boy was identified Monday as Keane Webre-Hayes.

During an afternoon press conference, the boy's mother, Ellie Hayes, said she was still processing the situation, but said she's grateful her son is alive.

"Keane is really special. He's really neat and one word I would describe him as is nice. He's a nice kid. He's very brave, very strong...He's a warrior. I didn't know he was that good of a swimmer. I'm really proud of him," she said.

She added that Keane is talking, alert and eating as he recovers from emergency surgery.

A 13-year-old boy was airlifted to a hospital after being attacked by an approximately 11-foot shark at a beach in San Diego County.

Ellie said that when her son is ready, he will share his story of the attack and how he survived.

Keane was diving for lobsters when he was bitten multiple times by an approximately 11-foot shark.

Three good Samaritans rushed to the injured boy's aid and transported him to the shore on a kayak.

He was airlifted to Rady's Children's Hospital San Diego. While doctors did not provide in-depth details about the bite, during the Monday press conference they did say his bite was very large and deep and that Keane had lost a lot of blood.