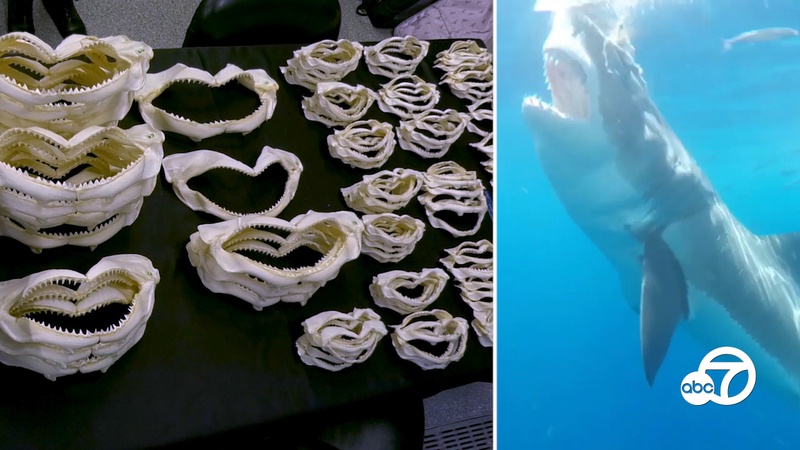 Woulard has worked in the Office of Law Enforcement within the U.S. Fish & Wildlife Service for decades, so when a suspicious shipment of shark jaws came through the Port of Long Beach, she knew who to call: the Shark Lab at California State University, Long Beach.

"They dropped off 28 boxes of shark jaws that we stored in my garage and then we just set about trying to learn how to identify the jaws based on their tooth morphology and that took awhile," said Dr. Gwen Goodmanlowe, a lecturer in the marine biology department.

Over the course of over five months, Goodmanlowe and a team of students identified the species of nearly 6,000 shark jaws.

"It's legal to import bull shark, so they were all labeled bull shark," Goodmanlowe said. "We found 23 species in there; 0.4% were bull shark."

According to Goodmanlowe, the identification process entailed a very steep learning curve.

"Part of the problem is, we didn't have a reference collection," said Goodmanlowe. "Sometimes the teeth of different species just look so similar to each other, that it's just one small, little difference."

Goodmanlowe said these shark jaws would most likely be sold as curios.

"People buy them to put on their wall or put on their shelf, which is really sad in my opinion because these animals are being killed senselessly," she said. Woulard said these jaws would normally sell for $20 to $200.

The journey of the shark jaws did not end at the Shark Lab.

"Many people ask, 'Why do you seize it? It's already dead,'" said Woulard. "We try to get the best use. We donate for the purposes of furthering education."

Students in Berlin's classroom are learning about human impact on marine life.

"I've grown up living by the ocean; seeing it deteriorate, it's sad," said Isabella Kolts, senior at St. Anthony High School. "We're throwing away a beautiful ecosystem just for money."