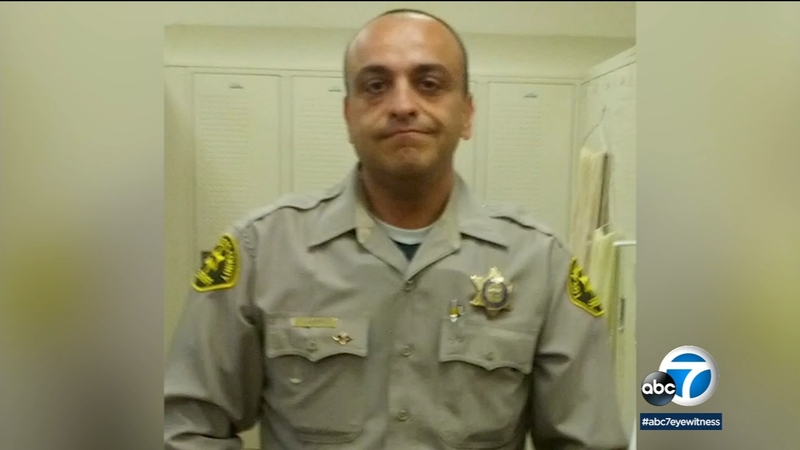 Days after a judge ordered Villanueva to strip Mandoyan of his gun, badge and uniform - the sheriff says new evidence may show Mandoyan never should have been fired in the first place.

Specifically, Villanueva says there are as many as 18 minutes of video that Mandoyan's ex-girlfriend, also a former deputy, never turned over to investigators. That video, originally released in March, appears to show Mandoyan attempting to break into the ex-girlfriend's apartment.

"The video may encompass up to 94% of the incident which had occurred on the complainant's patio," said Villanueva at a news conference Wednesday.

Mandoyan tells Eyewitness News that the quarrel on the patio was resolved and the couple made up.

Villanueva also lashed out at the Los Angeles County Board of Supervisors Wednesday.

"This is about five people ... five powerful L.A. County supervisors who are suing the sheriff because they insist the sheriff cannot hire or fire employees even though I was elected by voters to run this department," said Villanueva.

Supervisor Sheila Kuehl says Villanueva fails to understand the "rules of the game."

"I think his greatest resentment is that he thought he'd be all powerful, and he's being stopped in his tracks," said Kuehl.

County supervisors are suing the sheriff to stop him from reinstating deputies who were terminated for alleged misconduct.

Mandoyan was fired by former Sheriff Jim McDonnell. His firing was upheld by the Civil Service Commission.

Villanueva says the firing of Mandoyan and others was politically motivated. He campaigned on the promise to reinstate deputies he believed were wrongfully terminated.

Villanueva says that between 2015 and 2018 there were 14 fired deputies who were brought back onto the department. He says they included deputies who had been accused of domestic violence, driving drunk, false statements, solicitation of prostitution and sexual misconduct.

Officials familiar with the process say that deputies can be reinstated by the Civil Service Commission or the courts - even if the sheriff objects. Any settlement agreements must be approved by county counsel. Mandoyan's was not.

Kuehl referred to Villanueva's latest statements as "amateur hour" and expressed concern about the sheriff's judgment.

"I also think that somewhere in the sheriff, he does not take domestic violence as seriously as we want him to. He seems to be diminishing it," said Kuehl.

In a statement, Supervisor Mark Ridley-Thomas told Eyewitness News, "I assert that there is no upside to having the Sheriff's Department tarnished by reinstating deputies who are not fit to serve. It does not help public safety or public confidence to reverse reforms that we have worked so hard to put in place."