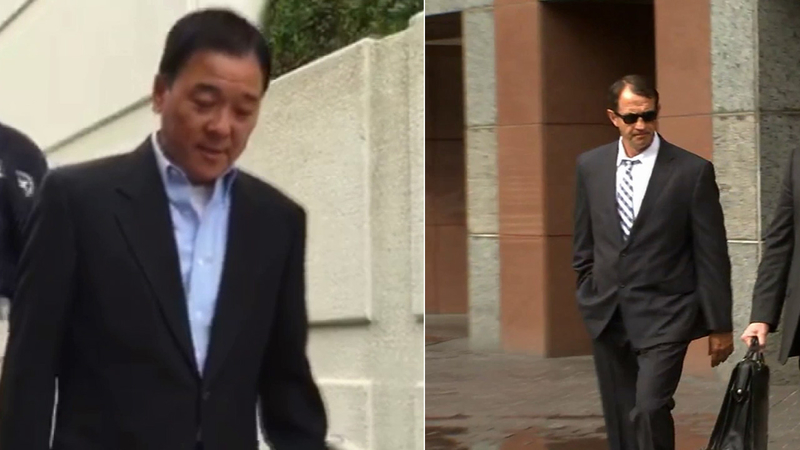 LOS ANGELES (KABC) -- Former LASD Undersheriff Paul Tanaka and former LASD Captain Tom Carey are out on bond after pleading not guilty to federal charges of obstructing an FBI investigation into brutality and corruption in the Los Angeles County jails.

The former lawmen looked glum as they entered magistrate court Thursday afternoon - handcuffed and shackled, but wearing street clothes. If convicted, the charges could send the men to federal prison for years.

Tanaka and Carey did not answer questions as they left the courthouse. Booking photos, fingerprints, a passport surrendered. It's a strange about-face for the two men who spent a collective 60-plus years in law enforcement.

Yonekura and FBI Assistant Director in Charge David Bowdich condemned a "corrupt culture" they say was fostered by the defendants and their co-conspirators.

"Tanaka had a large role in institutionalizing certain illegal behavior within the sheriff's department," Yonekura said.

Tanaka and Carey are both charged with conspiracy to obstruct justice and obstruction of justice. Carey is also charged with two counts of making false statements.

Tanaka and Carey, both 56, are the eighth and ninth LASD officials to face criminal charges related to the obstruction of an FBI investigation into corruption and abuse of inmates at two jails, including Men's Central Jail.

In 2011, inmate-turned-FBI informant Anthony Brown was hidden from his FBI handlers. Brown was booked and re-booked under a series of false names, moved to multiple locations and eventually told by sheriff's officials that the FBI had abandoned him.

Seven now-former LASD deputies, sergeants and lieutenants were convicted last year for their roles in the operation. All seven argued they were only following orders from their superiors. They were sentenced to prison terms ranging from 18 to 41 months and are now appealing the guilty verdicts.

"This new case illustrates the fact that the leaders, who foster and hide the corrupt culture of the organization, will be will be held responsible just like their subordinates," Yonekura said.

The indictment alleges that both Tanaka and Carey were aware of rampant abuse of inmates inside county jail facilities, which are run by the sheriff's department, but took no action to stem the abuse.

"The allegations in the indictment include cover-ups, diversionary tactics, retribution and a culture generally reserved for Hollywood scripts," Bowdich told reporters.

The indictment specifically refers to Tanaka's infamous encouragement to deputies to work in the "gray area," a reference to pushing the limits of legality while on the job. According to the indictment, Tanaka wanted to cut the Internal Affairs Bureau from 44 investigators to just one investigator.

In 2007, the indictment says, Tanaka informed deputies that he would be checking to see which captains were "putting the most cases" on deputies so he could put cases on those captains.

Tanaka entered a not guilty plea in court Thursday and spent much of the time in court with his eyes cast downward.

Prisoners are not supposed to communicate with people in the courtroom gallery, but at one point -- Tanaka and his wife mouthed something to one another. A courtroom marshal admonished Tanaka's wife and asked her to move to the other side of the courtroom.

"We will aggressively defend these baseless charges filed against him," attorneys said in a statement. "At all times, Mr. Tanaka dedicated himself to serving the residents of Los Angeles County honorably, ethically, and legally. After all the facts come to light, we are confident he will be exonerated of any wrongdoing."

Carey also pleaded not guilty. His attorney has not commented on the indictments.

Tanaka and Carey will not be allowed to travel outside of California and contact with potential witnesses in the case is forbidden. Tanaka surrendered a passport. Carey did not have one. Neither will be allowed access to firearms or ammunition as a condition for their pre-trial release.

"The last several years have been hard on everyone. The indictments are part of a process that will run its course," Los Angeles County Sheriff said in an internal message sent to the department. "During this time it is important for us to focus on our mission and look toward the future in demonstrating what the LASD is all about."

Tanaka served in the department for more than 30 years and was LASD's second-in-command until 2013, when Sheriff Leroy Baca forced him out after a string of department scandals.

He is currently the mayor of Gardena. He ran for L.A. County sheriff in November but lost to Jim McDonnell.

Carey was relieved of duty in December 2014 and retired in March after 35 years with the department.

Carey testified for the defense at all three trials as well, telling jurors that LASD executives believed a "rogue" FBI agent must be to blame for the smuggling of a cellphone into Men's Central Jail and inmate-turned-FBI informant Anthony Brown.

Carey was among those called to a high-level Saturday meeting at which Baca gave orders for Carey's ICIB investigators to conduct a criminal inquiry into how the cellphone got into the jail. Baca also gave an order that no one could see Brown without permission from Tanaka. Baca has not been charged. Yonekura said the investigation is ongoing.

Hector Villagra, executive director of the American Civil Liberties Union of Southern California, said Tanaka and Carey's indictments are "a sad, but necessary, reminder of the Sheriff's Department's history of condoning violence."

"While it remains up to a court and a jury to determine Mr. Tanaka's and Mr. Carey's innocence or guilt, what is clear is that no one is above the law. Both men have done immeasurable harm to the department's reputation and undermined public trust in the very agents who are supposed to serve and protect the public. As Chief Justice Earl Warren wisely noted, 'The police must obey the law while enforcing the law.' The indictments clearly indicate just how much work the Sheriff's department has to do to rebuild public's trust," Villagra said in a statement.