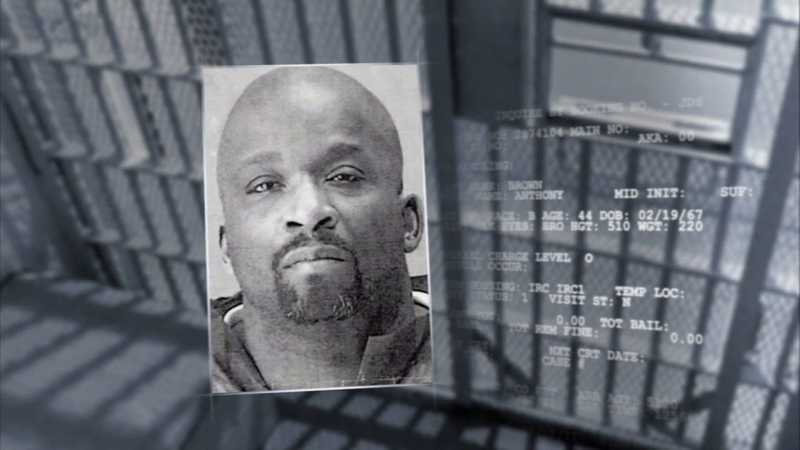 LOS ANGELES (KABC) -- "No, I don't have no regrets," inmate-turned-FBI-informant Anthony Brown told Eyewitness News in an exclusive interview from state prison.

Brown's role in the FBI's covert investigation of the Los Angeles County jails undoubtedly put him at risk for retaliation. He'll forever be labeled a "snitch."

It was Brown's information from behind bars that helped launch the FBI's undercover operation inside Men's Central Jail in the summer of 2011. The target? A corrupt deputy willing to accept a bribe.

So far, nine former LASD officials, including former Undersheriff Paul Tanaka, have either pleaded guilty or been sentenced to prison in connection with the scheme to block a federal investigation into inmate abuse and corruption inside the jails. Tanaka, sentenced to a five-year term, has been ordered to surrender to prison next month.

"Someone had to do it, why not me?" Brown said about his work with the feds.

Brown spoke out exclusively to Eyewitness News again as the federal corruption trial of former Los Angeles County Sheriff was wrapping up. Jurors have now deliberated for about 11 hours without reaching a verdict.

On Tuesday, jurors sent six notes to the judge. Their requests ranged from read-backs of testimony from three prosecution witnesses -- to clarification on a key legal issue.

In one note, jurors asked, essentially -- was it legal for the sheriff's department to approach FBI Agent Leah Marx? The note added that jurors were confused by a jury instruction that said local law enforcement does have the authority to investigate violations of state law by a federal agent, but they cannot use that authority to obstruct justice.

Judge Percy Anderson called the jury into the courtroom to tell them that they - the jurors -- must determine if Baca's intent was obstruction.

"Intent is and was always the toughest part of the case," said former federal prosecutor Miriam Krinsky who has been following the case. "The facts have never been in dispute -- rather the key has always been why Baca did what he did and to what extent he was part of the obstruction activities."

Brown, who was now serving 423 years to life for armed robbery, said he has frequent contact in state prison with inmates newly arrived from Men's Central Jail.

"They say it's changed a lot," Brown said. "The deputies... not aggressive, I mean, that's enough for me right there because it was really bad."

From prison, Brown has high praise for the FBI and the U.S. Attorney's Office, saying they are the "real heroes and deserve the praise," for "standing up" to misconduct in local law enforcement.

"Their integrity and courage would not allow them to turn a blind eye to misconduct committed by LASD deputies," he said.

The episode was life-changing for Brown. His cover as an informant was blown in August of 2011 when jail guards found Brown's contraband cellphone stashed in a bag of Dorito's during a routine search.

Brown's phone calls from jail were traced by LASD investigators to a civil rights squad of the FBI - a squad that investigates potential corruption in local law enforcement. Soon after, Brown's name was changed in the LASD computer system, he was moved repeatedly, and discouraged from further cooperating with the FBI.

"The whole ordeal of assisting the FBI was a living hell," Brown told Eyewitness News. "I knew at any time I could be killed -- disappear without a trace -- if the LASD deputies found out I was assisting the FBI by reporting corrupt deputies."

Baca's defense is, in part, that the former sheriff had promised the FBI to protect Brown at a time the two agencies were at a standoff.

Brown, however, rejects the idea that the LASD's actions were meant to protect him.

"That's a straight, flat-out lie," Brown said. "They weren't trying protect me, they were hiding me and they let me know."

"They told me what they was doing. 'You're not going to see the FBI right now, we're just going to put you over here,'" Brown explained.

Brown, who is appealing his armed robbery convictions, told Eyewitness News he is gratified that corrupt deputies are behind bars too.

Jurors weighing the fate of Baca will resume their deliberations on Wednesday morning at 8 a.m.