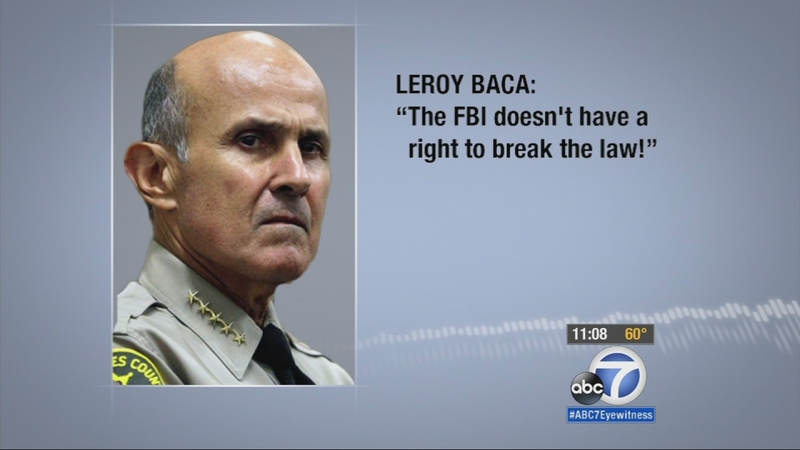 LOS ANGELES (KABC) -- To then-Sheriff Leroy "Lee" Baca, it was a sucker punch and a betrayal by the FBI, his longtime partner in catching crooks. Federal investigators deliberately kept Baca in the dark as they set up a sting on the sheriff's turf -- Men's Central Jail in downtown Los Angeles.

In an unprecedented standoff, the two mega-agencies did not communicate for weeks. Competing investigations ensued and seven deputies paid the price for overstepping their authority.

The blowback began with a phone call on a Thursday evening in August of 2011. The head of the FBI in Los Angeles, Steve Martinez, was on the line for Sheriff Baca. Martinez told Baca that a contraband cellphone found at Men's Central Jail belonged to the FBI and was part of an undercover FBI investigation into civil rights abuses inside the jail.

Sheriff Baca didn't take the news well. At first, he was confused. Martinez had to explain the situation three times before Baca seemed to grasp that the cellphone belonged to the FBI. Baca called Martinez back the next day, more "fired up," angry and upset that he'd been kept in the dark.

ASST. U.S. ATTORNEY BRANDON FOX: When you said just there that you didn't start this fight... who started the fight?

SHERIFF LEROY BACA: Whoever decided to do all this and say that you can't trust the sheriff even!

FBI recordings and grand jury transcripts obtained by Eyewitness News shed new light on the federal probe that appears to be reaching higher up the LASD's one-time chain of command. Multiple sources close to the case tell Eyewitness News that indictments of higher-ranking officials could come at any time.

If that proves true, the defendants will join seven lower-ranking LASD deputy sheriffs who were indicted in late 2013. Those seven deputies, sergeants and lieutenants were convicted last year of obstructing the FBI investigation and will face federal prison time if their appeals are denied.

SHERIFF LEROY BACA: The FBI doesn't have a right to break the law!

At the heart of this case is Baca's anger: How could the feds infiltrate HIS jail and go after HIS deputies, without telling Baca himself? Baca fervently believed the FBI had broken the law by setting up a sting that led a corrupt deputy to smuggle a cellphone into the jail and to inmate-turned-FBI informant Anthony Brown. Undersheriff Paul Tanaka told FBI agents about the angry phone call he received from Baca.

UNDERSHERIFF PAUL TANAKA: I just remember him being mad, mad, mad! A lot of colorful language - just mad! And - you find out that F-ing phone, you get that phone you hold onto that phone. I don't want it to leave our custody!

Baca convenes a high-level Saturday meeting. Despite FBI Assistant Director Steve Martinez telling him that the phone was part of a legitimate, authorized FBI operation, Baca wants an investigation of his own. How did the phone get into jail? Who is responsible?

It's NOT a crime, because it's all part of a sanctioned, undercover operation by the FBI. Still, Baca issues the order: No one can get into see inmate Anthony Brown without permission from Undersheriff Paul Tanaka.

In the days and weeks to come, Anthony Brown is hidden from the FBI - his name is changed and computer records are falsified. The sheriff's department puts Brown's FBI handler Special Agent Leah Marx under surveillance and later threatens her with arrest.

WEB EXTRA: Watch video of confrontation between LASD and FBI 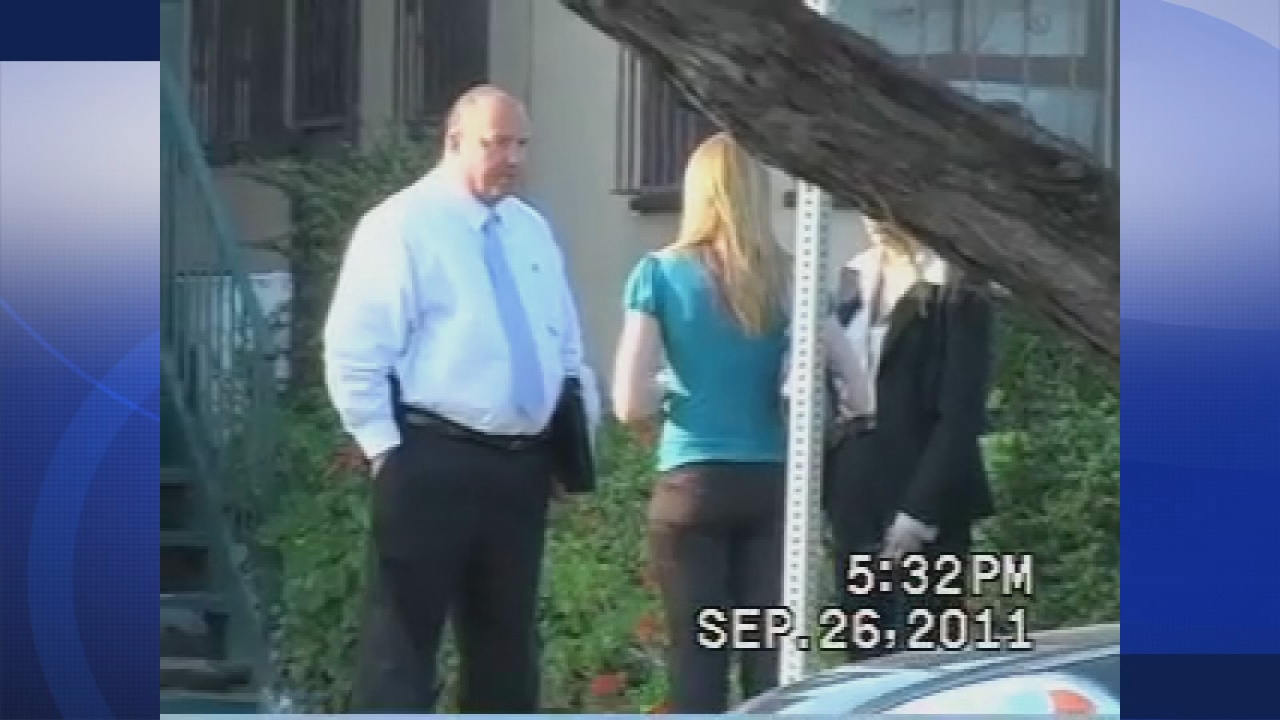 SHERIFF LEROY BACA: Let's not play games in here! You're an FBI agent, you know that when you get to the edge, that the heat is gonna come down hard whether it was legal or illegal!

The FBI didn't trust Sheriff Lee Baca or his inner circle to keep quiet about the widening federal investigation into civil rights abuses and corruption inside L.A. County jails, which are run by the sheriff's department. Inmates were telling FBI agents harrowing tales from behind bars; deputy-on-inmate beatings, cover-ups, deputies engaged in gang-like behavior, falsified reports.

The FBI launched its investigation in 2010 and quickly came into contact with Men's Central Jail inmate Anthony Brown - a soon-to-be convicted armed robber with a long rap sheet and a flair for the dramatic. Brown claims members of the Gambino crime family killed his wife and that he is innocent of the armed robbery charges against him, despite surveillance footage of him firing a gun and a videotaped confession made shortly after his 2009 arrest.

Brown's wild and shifting stories complicated matters for LASD investigators. First he told them that a nurse smuggled in the phone, then a deputy. Most concerning of all, Brown told LASD investigators that the FBI's operation included not just the smuggling of the cellphone, but also drugs. That false claim bolstered Baca's belief that a "rogue" FBI agent might somehow be involved.

SHERIFF LEROY BACA: We have too much to do than put prisoners who are at risk in a position where they are trusted more than I am! I am not going to accept that!

Baca has never publicly spoken at length about his involvement in the operation that's left many of his former deputies and colleagues facing prison time or possible indictments. But FBI interviews and grand jury transcripts obtained by Eyewitness News paint a picture of the longtime sheriff as hurt and betrayed.

Mike Gennaco, the former Chief Attorney of the L.A. County's Office of Independent Review and confidante of Baca, spoke to FBI investigators about the Sheriff's reaction to the secret federal probe.

SHERIFF LEROY BACA: The FBI has no reason to mistrust me!

Baca's anger spilled over at meetings held between the U.S. Attorney's Office, the FBI and the Sheriff's Department. Steve Martinez described Baca as "ranting and raving" at a meeting in late September 2011.

At that point, U.S. Attorney Andre Birotte and Martinez had both repeatedly told Baca over a period of weeks that the cellphone was part of an authorized federal investigation into civil rights abuses inside the jails.

According to Martinez's interview with the FBI, Baca had refused to speak with Martinez for a period of time and U.S. Attorney Birotte was forced to act as a go-between.

FBI INTERVIEW OF STEVE MARTINEZ: On Sept. 27, 2011, Martinez, Birotte and Baca met for a second time. Martinez did not have any phone communications with Baca between the first meeting and this meeting. Baca spent the first two-thirds of this meeting, "ranting and raving."

Why didn't the FBI tell Sheriff Baca about their operation inside his jails? FBI interviews of Baca, Tanaka, Martinez and Gennaco all point to hurt feelings and bad blood over a previous FBI operation at the North County Correctional Facility - also run by the LASD.

"Operation Northern Exposure" was an FBI probe into allegations that LASD deputies were smuggling marijuana into the jail. According to Martinez's FBI interview, as soon as federal agents shared details of the probe with an LASD commander, the investigation went cold.

It was clear, according to Martinez, that the LASD commander had leaked details of the investigation to deputies working inside the jail. Martinez explained this to Baca at a meeting between Baca, Birotte and Martinez in late September of 2011.

SHERIFF LEROY BACA: Mr. Martinez... when I asked him in the U.S. Attorney's Office - why did you do it the way you did it? And he attributed that one of the agents inside his office alluded to a prior investigation in the jails that we worked together on and that the agent did not trust the L.A. County Sheriff's Department to be a partner in something as sensitive as this. Again, that they are obstructive, obstructionist and on and on and on. Then I understood where he was coming from.

So, who was pulling the strings at the top of the LASD operation that's left seven deputy sheriffs facing federal prison time? Baca and Tanaka have both tried to distance themselves from the operation. Tanaka told FBI investigators that Baca, "was definitely calling the shots of this investigation."

When Eyewitness News asked Baca about Tanaka's claim that he was "out of the loop," Baca angrily replied, "Mr. Tanaka was fully in the loop, in fact more in the loop than even me!"

Who was in the loop? Who was out of the loop? Ultimately, a jury may get to answer that question.