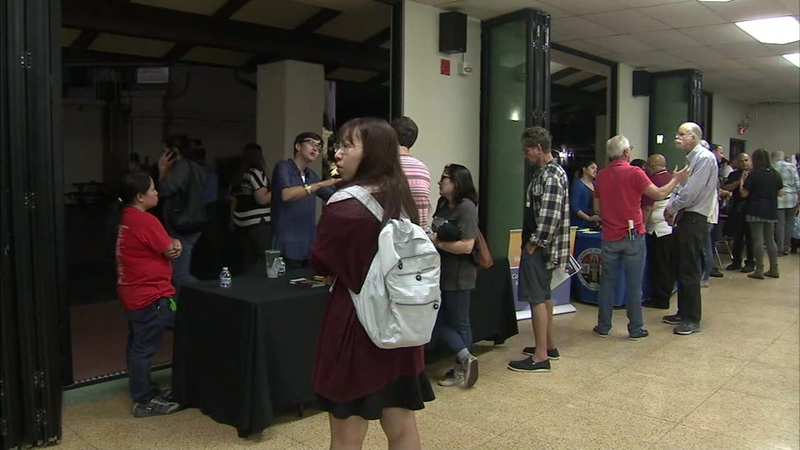 Los Angeles City Councilman David Ryu was met with boos as he spoke about his homeless housing plan at the meeting.

Rick Marcelli and his wife say the informational meeting was a disaster.

"I think it was very close to what I would describe as a riot," Marcelli said. "The whole thing had to be a complete embarrassment for Ryu."

He said as a result of voters passing Prop. H and Prop. HHH, the funding needed is available, but locations to build the shelters are needed.

"Ten years ago, everybody said 'Just lock them up,'" Ryu said. "But people have realized our jails are overcrowded. You can't arrest your way out of this problem."

While the need is great, neighbors say building shelters in Sherman Oaks will only bring more homeless to nearby residential areas.

"I've had a brick thrown at me by homeless, I've had my life threatened three times," Marcelli said. "It's so disgusting. We've found these transients in our Jacuzzi taking baths. If that's not disgusting, I don't know what is."

Not everyone is against the proposal, which is still in its infancy. Ryu said there will be many other informational meetings and assessments, before any decisions are made.

"I've been down and out myself, so I understand," Sherman Oaks resident David Gordon said. "But somebody has got to help these people somehow, so I think it's not really a question should they be helped or not, but how they should be helped."
Report a correction or typo
Related topics:
community & eventssherman oakslos angeles countyhomelesshousingaffordable housing
Copyright © 2022 KABC Television, LLC. All rights reserved.
TOP STORIES
Man accused of fatally stabbing UCLA grad student arrested
Voting bill collapses, Democrats unable to change filibuster
LA County sees 94% jump in homicides in 2 years, LASD stats show
TX mom pregnant with 6th child dies from COVID complications
Increase in SoCalGas bills a shock to some local customers
Homeowners 'wasting water' will get more than a fine, officials say
Vice President Kamala Harris to visit San Bernardino on Friday
Show More
COVID-19: 59 new deaths in LA County, positivity rate at schools drops
Man charged in attack on OC vaccine-clinic workers
Starbucks no longer requiring US workers to be vaccinated
Cardi B offers to pay for funerals of all 17 Bronx fire victims
Man sentenced to life in prison for violent crime spree in LA County
More TOP STORIES News