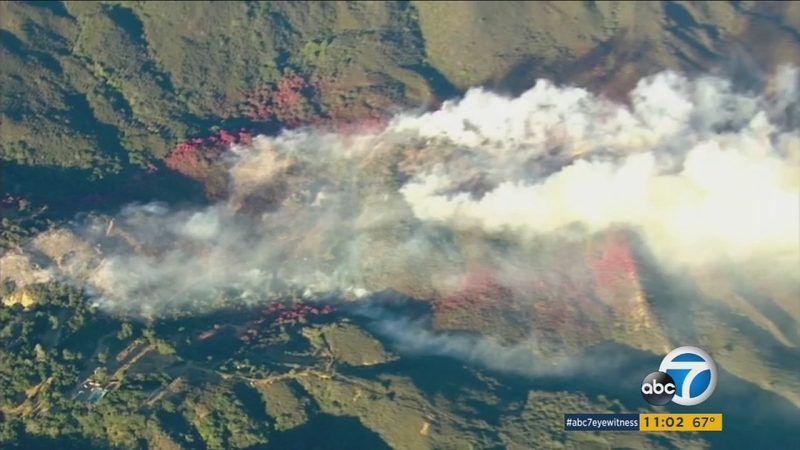 An air-quality warning was issued for Los Angeles and Orange counties as smoke from the blaze was drifting over a wide area.

As of Friday afternoon, the smoke was not yet causing significant air quality concerns, but it could reach unhealthy levels for sensitive groups in some locations depending on changing fire and weather conditions, the South Coast Air Quality Management District warned.

The SCAQMD advised people to exercise caution and avoid unnecessary outdoor activities in any area that could be impacted by the smoke. Vulnerable populations, such as people with respiratory or heart disease, the elderly and children should remain indoors.
EMBED More News Videos

Parts of Los Angeles and Orange counties are under a smoke adversary due to the Sherpa Fire burning in Santa Barbara County.

People were also advised to keep windows and doors closed and run air conditioners with the fresh-air intake closed and filter clean.

The Los Padres National Forest division of the U.S. Forest Service posted on Twitter Friday morning that the fire had scorched 4,000 acres and was at 5 percent containment.

Shortly after 5 p.m., Cal Fire posted an update stating the fire grew to 5,866 acres and about 20 percent was contained.

Firefighters worked through Thursday night to battle the flames whipped up by sundowner winds, which reached upwards of 35 mph. This allowed the fire to explode in acreage.

Fire officials said one out-building was destroyed by flames overnight.

Just received update on #SherpaFire 1 structure destroyed overnight; not determined yet what type of building. 4,000 acres. Smokey up here!

Approximately 1,230 fire personnel are assigned to the blaze. No injuries have been reported.

The winds and temperatures decreased Friday morning and afternoon, giving firefighters a chance to make some progress during the day. By Friday evening, temperatures began to cool and fire officials planned to take advantage of the conditions before the major heat wave expected over the next few days.

"The down-canyon push that we've had the past two nights have been absent tonight. So far, knock on wood, we are holding the fire where we are, and we're trying to get ahead of it so that when it does try and come off the hill, if it does again tonight or tomorrow night, we'll be ahead of the game," said Santa Barbara County Fire Battalion Chief Chris Childers.

The blaze broke out Wednesday afternoon and quickly spread from 50 acres to 1,100 by Thursday morning. The Sherpa Fire has prompted mandatory evacuations of roughly 400 homes and ranches in the area. Authorities said 270 structures are under threat from the blaze.

Twice on Thursday the Sherpa Fire also caused the closure of the 101 Freeway in both directions along the Gaviota coast between Buellton and Goleta. It was reopened shortly before 5 a.m. Friday.

The area surrounding the blaze is remote, but there are homes and ranches, including the Circle Bar B Ranch. Fire crews are surrounding the ranch just in case the winds shift. More than a dozen guests and 45 horses were evacuated.

This canyon has not burned like this since the massive Refugio fire back in 1955.

Strong winds and steep and rugged terrain have made the firefight difficult for crews battling the blaze. At one point, the fire jumped over the center divider of the 101 Freeway due to the strong winds.

Eight air tankers, three heavy heli-tankers and medium helicopters and ground crews continue to stop the spread of the fire.