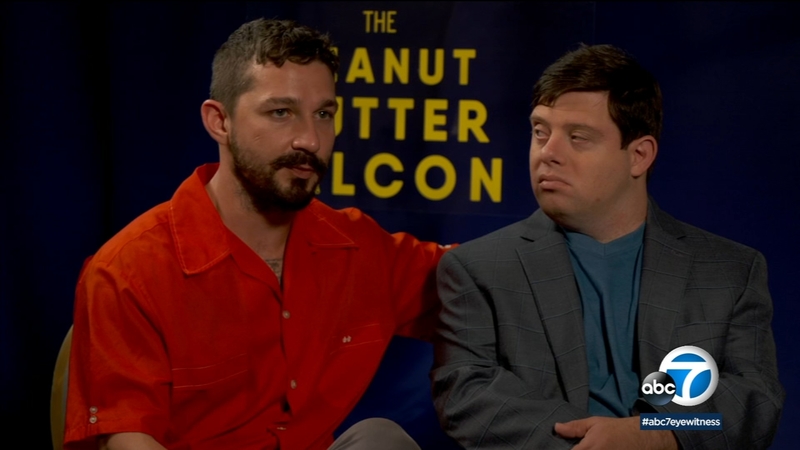 HOLLYWOOD (KABC) -- In the new movie "The Peanut Butter Falcon," a young man with Down syndrome breaks out of his nursing home with dreams of attending a professional wrestling school.

The film's star, Shia LaBeouf, says from the outset, he knew he wanted to work with newcomer Zack Gottsagen.

"He's very loving, not very judgmental of critical. There's no irony in him," said LaBeouf. "So those kind of aspects, like character, yeah, character, integrity, stuff like that. Very honest person. He's never lied in his life. He doesn't curse. He's quite pure."

LaBeouf said he felt the pressure was off of him and his performance, because everyone's eyes would be transfixed on his young co-star.

"If you were to put a lion on stage with a bunch of actors, nobody watches the actors," said LaBeouf. "You're all watching the lion."

And in this film, if Gottsagen is the lion, then the lion tamer, might be Dakota Johnson, who plays a woman who wants to get this young man back to the nursing home.

Gottsagen says his more experienced co-stars helped him in this role.

"Those two are, you know, very nice and they have been working with me a lot," said Gottsagen.

LaBeouf said the actors did spend a lot of time working on their scenes, and that Gottsagen kept them on their toes.

"There'd be magical moments to catch if we kept floating with him!" said LaBeouf.