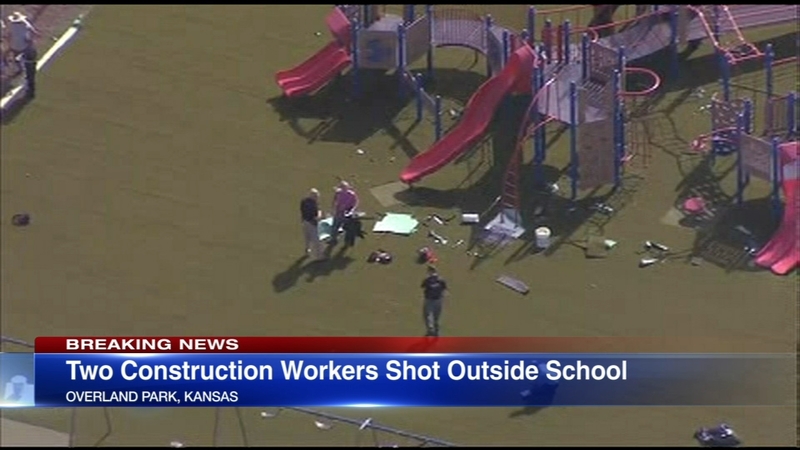 OVERLAND PARK, Kan. -- Authorities arrested a suspect Tuesday in a shooting that killed one contract worker and critically injured another outside an elementary school in suburban Kansas City.

A suspect was taken into custody outside a nearby home where authorities found a sport utility vehicle that was carjacked after the shooting at Sunrise Point Elementary School, according to Jason Rhodes, spokesman for the Overland Park Fire Department in Kansas. He was jailed but not formally charged as of Tuesday afternoon.

Rhodes said that when police started to move in with armored vehicles, the suspect bolted from the back door of the home and was taken down. His name wasn't immediately released.

Investigators said the suspect shot two co-workers earlier in the day as they installed artificial turf on a playground at the school. No students were at the school at the time, said Blue Valley School District spokeswoman Becky Miller.

One of the men died at a hospital a few hours after the shooting, Overland Park police spokesman John Lacy said. The second man was in critical condition. Names of both men have not been released.

The suspect had tried but failed to carjack another vehicle at a carwash before stealing the SUV, a black GMC Denali.

Police Chief Francis Donchez said the home where the suspect was arrested belonged to the owner of the SUV. He said it's unclear what led the suspect to go to that home but described it as "bizarre to say the least." Donchez said police never made contact with the suspect while he was inside the home but believed he was there because a dog came out of the house.
Report a correction or typo
Related topics:
kansasschool shootingshootingu.s. & world
Copyright © 2021 by The Associated Press. All Rights Reserved.
More Videos
From CNN Newsource affiliates
TOP STORIES