Driver shot in face, slams into tree in Santa Ana; shooter at large 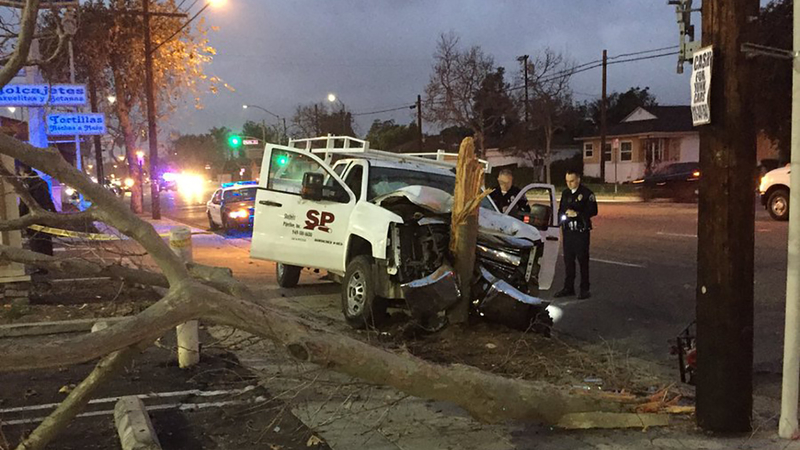 Driver shot in face, slams into tree in Santa Ana

SANTA ANA, Calif. (KABC) -- The driver of a company pickup truck slammed into a tree in Santa Ana on Friday morning after being shot in the face while driving to work, authorities said.

The shooting happened about 5:45 a.m. in the 1300 block of Edinger Avenue as the solo motorist was heading eastbound, near Pacific Avenue, according to the Santa Ana Police Department.

The assailant "pulled up next to him in the driver's side, we believe, and shot at him," police Cpl. Anthony Bertagna told reporters.

After being struck by gunfire, the victim drove about 100 yards and plowed into a tree on a curb line, investigators said. The force of the impact wrapped the truck's front end around the base of the tree, which was seen sheared in half near the mangled vehicle.

The wounded driver, who is in his 40s, was transported to a hospital in stable condition.

The incident was reported by a 911 caller who witnessed the crash, investigators said.

The victim gave a statement to police before he was rushed to the hospital.

"He knows he was shot, but he doesn't know by who or why," Bertagna said, adding that the shooting did not appear to be gang-related. "By all means, this is just a victim driving to work."

A spokesperson for the man's employer, Shoffeitt Pipeline Inc., says he has been a foreman with the company for four years.