A mom is praising Target for featuring a child with special needs wearing an Elsa costume from Disney's "Frozen" in their weekly ad. (Disney / Target)

Jennifer Kroll has seen children with special needs featured in advertisements before. But when the Grand Rapids, Michigan, mother came across a Target ad featuring a girl with crutches dressed up as Elsa from Disney's Frozen, she said her heart nearly burst.

"This was the first time we experienced a child in advertising that so closely mirrored our own daughter's special needs and passion," Kroll told ABC via email. "That sweet little girl, Bella, was front and center and thrilled to be dressed up as Elsa."

Kroll's daughter Jerrensia has arthrogryposis mulitplex congenita. The condition caused her hip sockets and the muscles in her legs to never properly develop and other leg issues. The family made the decision to amputate the 5-year-old's legs two years ago, with Jerrensia now walking on prosthetic legs with the help of arm crutches.

Jerrensia was ecstatic to see a girl featured in the ad who so closely resembled her.

"Her million watt smile flashed and her eyes lit up, 'Wow! Just like ME!'" Kroll told ABC. "[Jerrensia] loves Elsa with every bit of her being and Target validated, in a public way, that little girls with AFOs (leg braces) and arm crutches could be princesses, too," Kroll said. "And equally as important, kids without disabilities were exposed to a princess who doesn't fit society's mold of perfection."

Kroll shared a picture ad to Facebook, where it earned over 5,000 shares and a swarm of positive comments from across the world. Kroll says the reaction to her post has been overwhelming, and hopes that other retailers and the media at large can help change stigmas attached to people with disabilities.

"There are many countries that treat children born with special needs as less than human and abandon them in neglectful institutions," Kroll wrote. "My ultimate hope would be that if we placed value on those lives by normalizing them in our movies, television, and advertising, it would help to empty orphanages by preserving families and building families that treasure diversity." 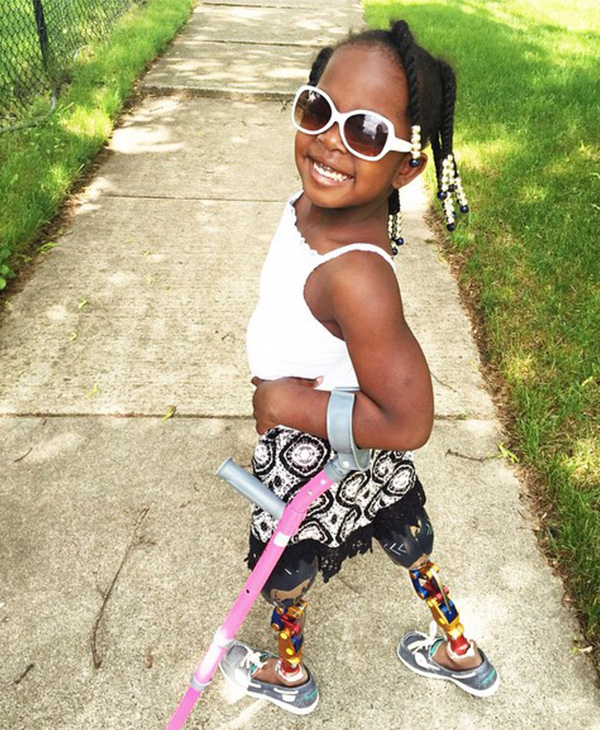 Target provided the following statement to ABC regarding their Halloween costume ad.

"At Target, our core beliefs of diversity and inclusivity are reflected in our advertising and in our business overall. We've included people with disabilities in our advertising for more than 25 years and are humbled by the support we've received recently. We look forward to a day when diversity of all types in advertising is no longer a topic of discussion, but a way of life."