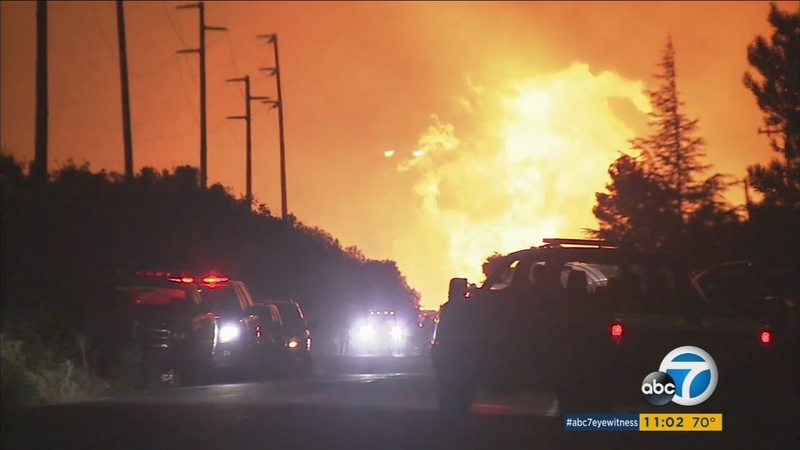 Dozens of families were hoping they have a home to come back to as firefighters continued to battle the monster blaze in the forest north of Crestline near Silverwood Lake.

More than 4,700 homes were impacted by voluntary and mandatory evacuation orders, which continued to expand throughout the day Monday.

Another evacuation center was set up at Rim of the World High School, 27400 CA-18, Twin Peaks.

The Pilot Fire is burning north of Silverwood Lake in the San Bernardino National Forest.

Fire officials from the U.S. National Forest Service said conditions were ripe for fire due to the drought.

"The vegetation is incredibly dry. All it takes is just one spark for it to move rapidly through, and that's quite frankly what happened yesterday...," said Bob Poole of the U.S. National Forest Service.

Although the brush fire was not in a densely populated area, about three dozen evacuations were ordered. Smoke advisories issued by health officials for the Mojave Desert area were also still in effect.

Those with small and large animals can take them to Devore Animal Shelter, located at 19777 Shelter Way in San Bernardino.

Highway 173 was closed between State Route-138 and Arrowhead Lake Road.

Those with questions regarding the Pilot Fire were urged to call the San Bernardino Fire Information Center at (909)383-5688.

No homes were burned in the fire as of Monday afternoon and no injuries were reported. Homes were protected by the use of fire retardant dropped from the air and gel applied by firefighters on the ground.