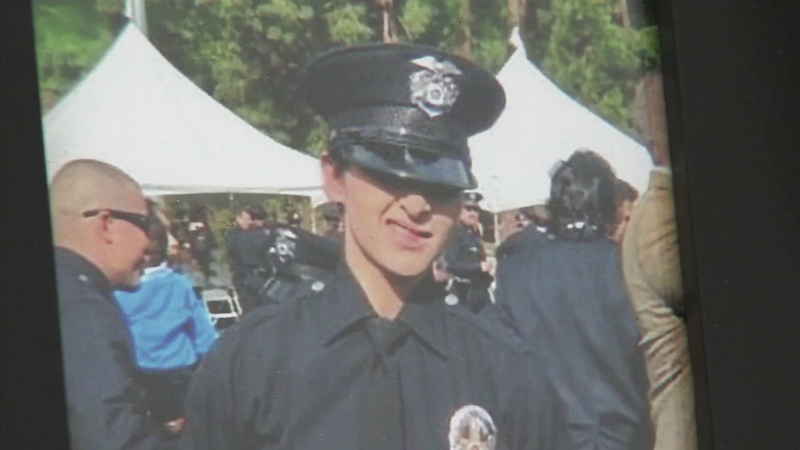 SIMI VALLEY, Calif. (KABC) -- The Los Angeles Police Department was mourning the death of an off-duty officer killed in a traffic collision in Simi Valley, and new surveillance video of the crash was released Monday.

Police said Officer Heather Monroe, 30, was a passenger in a car traveling southbound on Sycamore Drive New Years Day while an Uber driver, whose car is seen jumping off the ground following the impact, was going eastbound on Cochran Street.

The two cars collided, killing Monroe. She was wearing a seatbelt at the time of impact, according to investigators.

Meantime, a memorial for her was set up at the scene of the crash, where friends went to pay their respects.

"She was nice and she didn't take her authority in a wrong way. She was a really good person and I'm so sorry that this happened to her," Monroe's friend Serena Devries said.

The drivers and the Uber passenger were transported to a hospital with injuries that were not life-threatening.

"Although the exact cause of the collision is still being determined, it appears that one of the vehicles failed to stop at a red light," Simi Valley police said.

Both drivers were being tested to determine whether drugs or alcohol played a role in the incident, authorities said.

The cause of the crash remained under investigation.

Anyone who witnessed the collision is asked to call Robert Arabian of the Simi Valley Police Department's Traffic Bureau at (805) 583-6990.