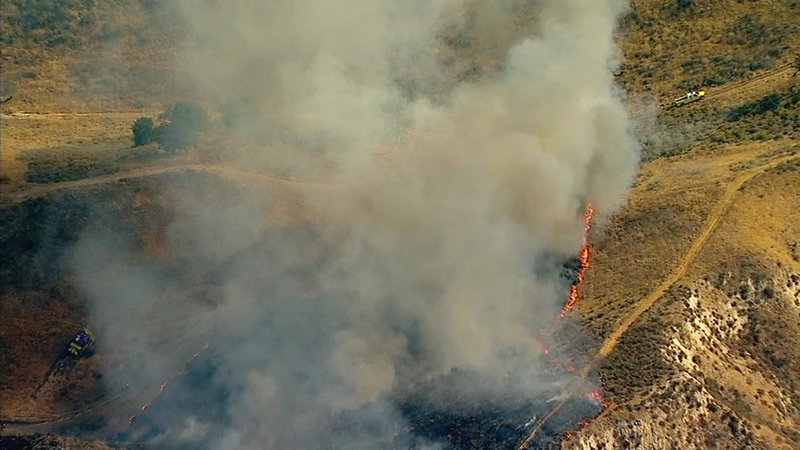 SIMI VALLEY, Calif. (KABC) -- A brush fire in Simi Valley was quickly contained after it burned 16 acres dangerously close to at least one structure on Wednesday.

The second-alarm blaze was first reported at 8:30 a.m. in the Tapo Canyon area.

#TapoFire: update on brushfire near Tapo Canyon is approximately 4 acres in size with a rapid rate of spread uphill. Second alarm has been requested including helicopters, hand crews, bulldozers and water tenders. @VCFD, @VCAirUnit pic.twitter.com/fi1SO19GuQ

The Ventura County Fire Department first reported the brush fire to be approximately 4 acres but said it spread rapidly uphill. AIR7 HD captured flames near at least one building. It was not known if the structure was a home.

The fire held at 16 acres, and no structures were lost.

#TapoFire contained at 11:06am. Holding at 16 acres with approx. 75 firefighters on scene. VCFD to remain on scene for at least two hours for mop up. Crews making sure there are no flare ups. pic.twitter.com/JqBcRR0gZX

There were no reports of any injuries.

According to the National Weather Service, winds were fairly mild but temperatures were expected to climb to 94 degrees in the afternoon in the area.
Report a correction or typo
Related topics:
simi valleyventura countybrush firefirewildfire
Copyright © 2021 KABC-TV. All Rights Reserved.
TOP STORIES
San Bernardino fire erupts near 215 Fwy, prompting evacuations
Search resumes for Brian Laundrie in Gabby Petito case
Video: Tourist taken to hospital after melee on Hollywood Walk of Fame
Search continues for homeless man who slammed into LA pedestrian
Hollywood Burbank Airport shut down after person runs onto runway
Heat advisories issued for most of SoCal on first day of fall
Movie and film workers might be headed toward a strike
Show More
'No one would be spared': Debt default would set off dire consequences
California struggles to conserve water amid historic drought
Conor McGregor prompts comparisons to worst first pitches in history
Growing scam targets Bank of America and Zelle customers
Woman safe after video of possible abduction in Bell Gardens
More TOP STORIES News