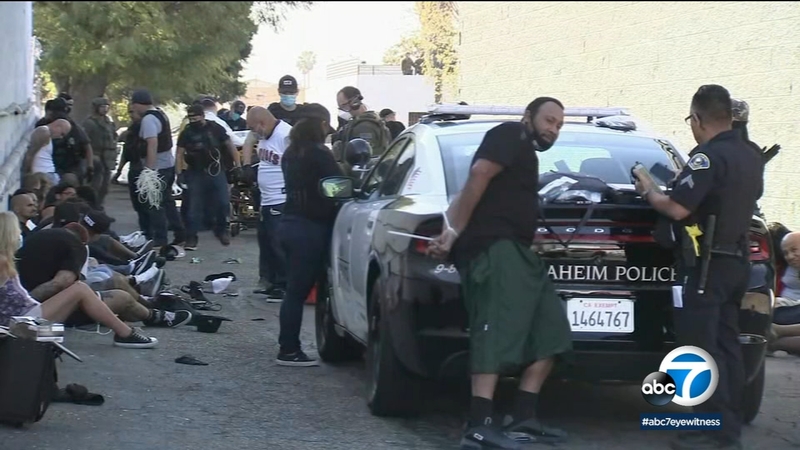 ANAHEIM, Calif. (KABC) -- Anaheim police raided an alleged illegal gambling "slaphouse" that was fronting as a hydroponics business and detained dozens of people.

A slaphouse is an illegal gambling business operating inside a home or business. The nickname comes from the sound of players slapping the controls of some of the games which can be heard outside the business.

At least 13 people were arrested and more than 70 detained after Anaheim police showed up at the business just before 8 a.m. Tuesday. Police, firefighters and a SWAT team surprised the crowd at the building that on the exterior appeared to sell hydroponics supplies.

After deploying flash bangs and making their way inside, officers began processing each person one by one.

Police say illegal operations like this attract other crime to the community.

"We'll have assaults, robberies, drug use, prostitution," said Sgt. Shane Carringer with Anaheim PD. "And a lot of times the business owners in the area will notice an uptick in crime that they can't necessarily put their finger on because these locations are obviously hidden and they don't know they're operating because they often operate at different hours of the night when they're not here in business."

One man who asked to remain unidentified said he worked at the operation because times are hard but is still glad to see it close.

"I'm kind of glad it's gonna be gone now 'cause I lost a lot," he said. "They stole my car. Any time they lose their money they're gonna prowl on the town and steal and rob and try to get back to the spot they were before."

Police say those booked into the Anaheim detention facility will be tested for COVID-19. The gathering of dozens of people in a small space has the potential to be a "superspreader" event, Carringer said.