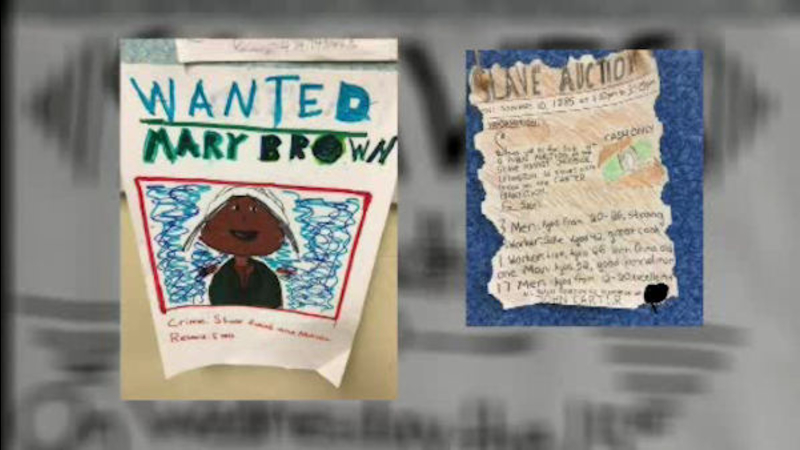 SOUTH ORANGE, N.J. -- Posters for slave auctions created by fifth-graders have been removed from the wall of a New Jersey elementary school hallway after some parents questioned the assignment.

The South Orange-Maplewood School District is planning a community meeting to discuss whether the assignment -- which asked to students to draw "examples of an event that would occur during (your) assigned colonial time period, including a poster for a lecture, speech, protest or slave auction" -- is appropriate for fifth-graders.

Superintendent John Ramos said in a note to parents that the project at South Mountain Elementary School is part of a larger Colonial America unit that's been used for 10 years.

One poster listed the names of available slaves, who included 12-year-old Anne, described as "a fine housegirl." Another poster says, "All slaves raised on the plantation of John Carter," and specifies that only cash is accepted.

The posters were called into question after they were observed hanging in the hallway during parent-teacher conferences.

"That's crazy, and I don't think they should've done that," parent Glenn Conover said. "That's disrespectful, first of all, to any of the black kids in the school."

Others point to a dark period in American history that needs to be taught.

"It's part of history, of course," caregiver Andrea Espinoza said. "It happened. I think it's good that they know.

Ramos said the projects should have been accompanied by an explanation.